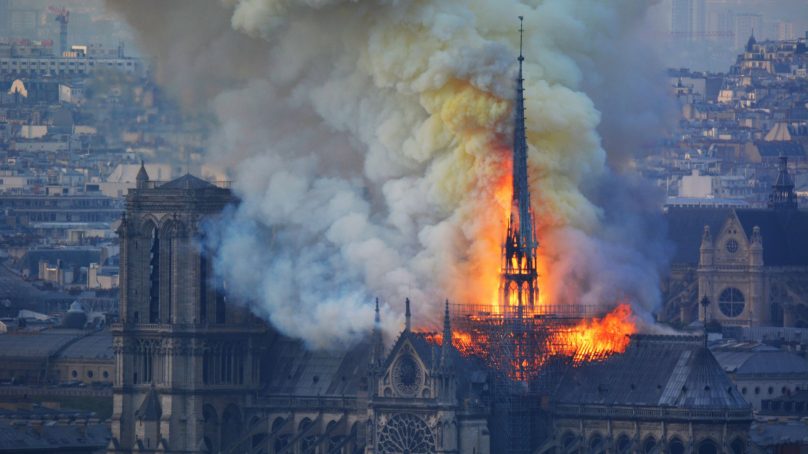 The Notre Dame Cathedral, one of the most iconic landmarks in the French capital, was engulfed in flames Monday evening as a catastrophic fire tore through the historic structure, collapsing its spire as fire officials raced to save the monument from total destruction.

According to media sources, the fire that ravaged the 13th century cathedral was under control by Monday night.

The fire burned for several hours, causing the iconic spire and the roof to collapse within the nearly 900-year-old structure. 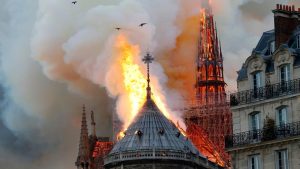 Jean-Claude Gallet, chief of the Parisian fire brigade, said one firefighter was injured while responding to the blaze, sources reported.

Two-thirds of the cathedral’s roofing was destroyed, Gallet told the press.

“It looks like the Olympic torch from the back with flames coming through the roof,” France 24 journalist Charli James reported during a live broadcast.

“It’s old wood that is dry and burns fast, and there’s a lot of wood in that building,” he said of the Cathedral.

Notre Dame’s ceiling has been described as a “forest,” due to the amount of wood that was used in its construction. Some of it is hundreds of years old, and tinderbox dry.

“Churches have their own problem, especially large cathedrals,” he said. “There’s a large open-air space, so there’s lots of air to feed the fire (along with) a lot of combustible stuff in the ceiling. And once (the fire’s) in the ceiling it’s hard to get up there — it could be 300 feet in the air.”

He says that as there were renovations underway in the 850-year-old church, some artifacts had been removed from the building, meaning that fewer relics may have been lost than might otherwise have been the case.

French President Emmanuel Macron also spoke out on social media to say that along with the entire country, he was “sad to see this part of us burn tonight.” Macron has vowed to rebuild the cathedral, and said he will seek international help to do so.

No deaths have been reported.

About 12 million people visit Notre-Dame yearly, its is known as the most visited monument in Paris.

The construction of the cathedral began in 1163 and was completed in 1345.

What is Trump’s “pact of the century” for Israelis and Palestinians (and why can it fail)?