Home  »  International   »   Stoning of gays in Brunei: Hassanal Bolkiah, the billionaire sultan who approved to punish homosexuals with Islamic law 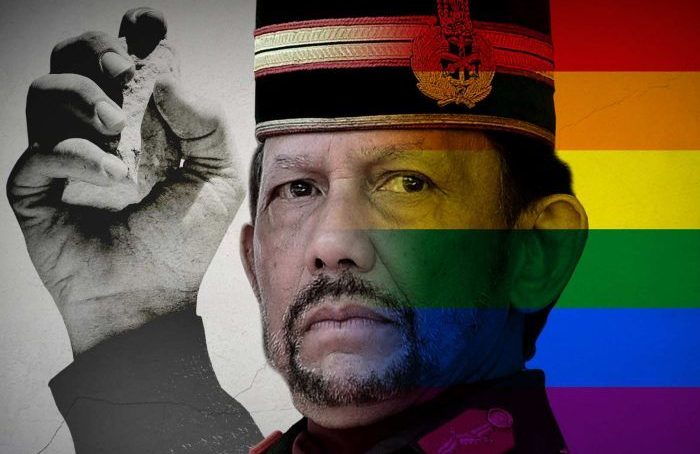 Stoning of gays in Brunei: Hassanal Bolkiah, the billionaire sultan who approved to punish homosexuals with Islamic law

He is one of the richest men and one of the few absolutist monarchs left in the world.

Head of State and Prime Minister at the same time, the sultan of Brunei, Hassanal Bolkiah, could not avoid becoming the object of a great wave of international outrage.

The reason? The entry into force in that Asian country of a new penal code based on sharia – or Islamic law – that punishes with stoning the sex between men and adultery, while providing for the amputation of hands and feet as measures to sanction other behaviors.

The adoption of these harsh penalties is the final stage of a judicial change process launched by the sultan in 2013 and whose application began in 2014, in a first phase, when it only affected crimes punishable by fines and prison sentences.

Already at that time, when the adoption of the sharia was announced, there was a great stir and announcements of boycott attempts against luxury hotels around the world that are owned by the Sultan .

These include the legendary The Beverly Hills Hotel in Los Angeles, which at the time were regulars such as Elizabeth Taylor, Richard Burton, Esther Williams, Joan Crawford, Gina Lollobrigida or Marilyn Monroe.

But who is Hassanal Bolkiah and why did he decide to apply these controversial measures in his country?

Hassanal Bolkiah is the heir of an uninterrupted dynasty that has lasted more than six centuries . 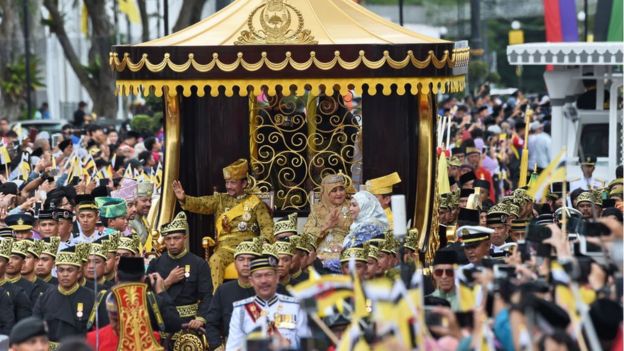 Image caption In 2017, when celebrating the 50th anniversary of his accession to the throne, the Sultan was transferred in a carriage pulled by 50 courtiers.

Born in 1946, he was appointed by his father, Omar Ali Saifuddien, as crown prince in 1961. In 1967 he was named sultan, for which he formally joined the government for more than half a century.

It was not, however, until his mother’s death in 1979 that his father actually gave him power completely.

This allowed Bolkiah to prepare to take full control of Brunei in 1984, when the territory regained its autonomy after having been a British protectorate for 95 years.

Located on the northeastern coast of the island of Borneo, this small sultanate of some 450,000 inhabitants is one of the countries with the highest GDP per capita in the world : about US $ 78,000 .

Its wealth comes mainly from oil and gas production, thanks to which its citizens enjoy numerous social benefits such as free health and quality education without having to pay taxes.

It is also this oil bonanza that explains how Bolkiah became the second richest monarch in the world , with a personal fortune according to Forbes estimated at around US $ 20,000 million, second only to King Maha Vajiralongkorn of Indonesia.

Image caption The exploitation of hydrocarbons is the basis of Brunei’s economy.

Brunei began producing oil in 1929 and then, in the mid-1960s, discovered large gas reserves.

The sale of these fossil fuels represents more than 60% of its GDP and 95% of its exports.

To manage these funds and prepare for a possible exhaustion of reserves, the sultan created in 1983 the Investment Agency of Brunei (BIA, for its acronym in English), a sovereign fund that manages the foreign investments made by the country with the surplus of oil wealth.

Thus, this agency owns the many luxury properties Brunei has abroad, including Beverly Hills hotels in Los Angeles, Dorchester in London, Le Meurice in Paris, or the Principe di Savoia in Milan, among others.

At the end of the 1990s, Brunei was in the midst of a major financial scandal when the bankrupt Amedeo Group, a private consortium of construction and real estate companies, through which billions of dollars had been funneled. the BIA.

The consortium was controlled by Jefri, a brother of the sultan, whom the monarch had also placed at the head of the investment fund.

Image caption The Dorchester hotel in London is part of a chain of luxury establishments owned by the Sultan of Brunei.

It was estimated that the group’s accounts payable exceeded US $ 10,000 million , forcing several assets to be sold, including a stake in a bank in Australia and a Boeing 747 aircraft.

According to several media outlets, the assets to be liquidated included Jefri’s unfinished yacht -whose construction cost was estimated at US $ 500 million-, 17 planes, 2,000 cars and a six-star hotel whose facilities included a theater, an golf and stables with air conditioning.

It was also reported then that the Sotheby’s house had planned to hold an auction with works of art belonging to Jefri in which it was expected to raise some US $ 600 million. Among the pieces on sale was a Renoir supposedly valued at US $ 70 million .

But the extravagances are not limited to the Sultan’s brother. Hassanal Bolkiah himself lives in the largest residential palace in the world, with some 1,778 rooms and whose construction cost about US $ 1,400 million, according to the Guinness Book of Records.

Image caption It is estimated that the construction of the luxurious presidential palace of Brunei cost about US $ 1,400 million.

The Guinness book website also credits the Sultan with owning the largest private collection of Rolls Royce cars, some 500 , many of which would have been acquired in the 1990s when his family was one of the largest buyers of this vehicle. luxury in the world.

According to Guinness, it is estimated that the Sultan’s collection of cars is valued at around US $ 4,000 million and includes many other collectible models such as the Porsche 959, the Bugatti EB110, the Lamborghini Murcielago LP640 and the Jaguar XJR-15, among others.

In 2017, Bolkiah celebrated his 50th birthday on the throne with a massive celebration that he arrived riding in a golden chariot that was pulled by 50 men.

As Sultan of Brunei, the power of Hassanal Bolkiah has no counterweights.

It is he who appoints the ministers of his cabinet, the members of four other councils of advisers, as well as the 36 members of the unicameral Legislative Council of the country .

Currently, he is also in charge of the Ministries of Defense, Foreign Affairs and Finance and Economy.

Image caption The Sultan of Brunei with the princes Charles and William of England, during a polo tournament.

Married since 1967 to Queen Saleha, Bolkiah had two other wives who ended up divorcing. In total, in her three marriages she has had 12 children.

In the late 1990s, Bolkiah and her brother Jefri were sued by Shannon Marketic, a former Miss United States who claimed to have been hired to do modeling and promotional work in Brunei and ended up locked for a month with other women in a kind of harem in the Sultan’s palace where they were sexually harassed, according to his version.

Finally, the complaint did not prosper and no charges were filed against either of the brothers.

The truth is that since his accession to the throne, the Sultan has been directing Brun e i in the direction of the application of Islamic law in an increasingly strict manner.

After the imposition of sharia, since 2014 it is not possible to consume alcohol. Since 2015, Christmas can not be celebrated in public either, although more than 20% of the country’s population is not Muslim.

Some experts attribute this increasingly strict application of Islamic law to the desire of the government to provide another source of authority vis-à-vis the population in anticipation of the problems that may arise from the weakening economic situation.

Image caption Although the majority of the population of Bruéi is Muslim and of Malay origin, there are several important minorities in the country, including one of Chinese origin.

Matthew Woolfe, founder of the human rights group The Brunei Project, told the BBC that this policy could also be related to the sultanate’s interest in attracting more investment from the Muslim world and more Islamic tourists.

The Sultan, for the time being, assured that he would like the call to prayer to be heard throughout the country, beyond the mosques.

” I want to see the Islamic teachings become stronger, ” he said in a public address on the occasion of an Islamic holiday, but without making direct reference to the new stage of application of sharia.