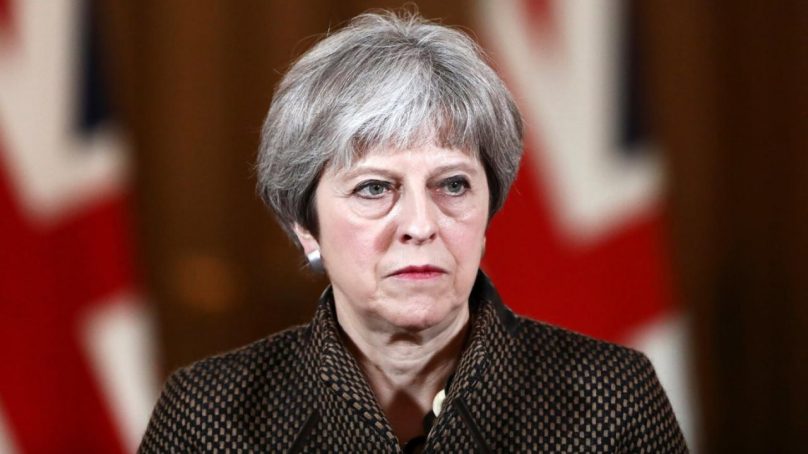 Theresa May must resign in exchange for approving Brexit agreement

Under an immense and growing pressure inside and outside your country.

The UK Prime Minister, Theresa May, could get the support she needs so that the agreement she reached with the European Union for Brexit will be approved by her country’s parliament if she promises to resign.

This is how the BBC was told by high-ranking figures of the Conservative party, to which she belongs.

The parliaments of that organization said that, although reluctantly , they could support the pact promoted by May if they know that she will not be in charge of the next stage of the negotiations to make the UK exit from the European bloc.

In fact, the British press has reported that several ministers in his cabinet are planning a coup against him.

However, the president’s office has dismissed the possibility that the leader could be persuaded to leave office or that she was willing to reach an agreement to ” share the work ” with ministers who would be given extra responsibilities.

And the version was denied by Economy Minister Philip Hammond, who told the Sky news network, “It’s not about individuals.”

“This is not about the prime minister, changing it will not help , changing the government party either,” Hammond said.

In recent days, May has been under immense and growing pressure to resign, after this week she was forced to ask the European Union for an extension to activate Article 50.

At midnight on Thursday the EU agreed to extend the deadline for the departure of the United Kingdom from its bloc, initially scheduled for Friday, March 29.

Image caption On Saturday in central London, several participants of a mass mobilization not only condemned Brexit but May’s leadership.

The decision, which was generally greeted with sighs of relief throughout the continent, was taken at the request of May, who has failed to get the parliament to approve the agreement she negotiated with Brussels for a year and a half .

But the leaders of the other 27 countries that make up the bloc did not accept the June 30 date originally proposed by the leader, offering instead two much closer dates.

If May gets parliamentary approval next week, the UK will be offered an extension until May 22.

But if the agreement is rejected for the third time, the EU would grant a much shorter extension, until April 12.

May has been harshly criticized for having blamed, in a speech to the British people, the parliamentarians of her country for the delay in the Brexit process.

This Wednesday he said he understands that they are fed up with the situation in which the process is: “It’s about time” for politicians to make decisions on the next steps, he said.

“It would be maneuvering”

It is unclear if May will re-submit the agreement to parliament next week, after he wrote to lawmakers that he would only have “enough support.”

And according to reports from some of Sunday’s British newspapers, ministers are planning to dismiss May as prime minister to replace her with an “interim leader”until an electoral process is organized later this year.

However, there are different versions of who the candidate might be.

However, a senior member of parliament told BBC journalist Ian Watson that even if May leaves office, it would not be enough for his agreement to be approved by the legislative body.

The BBC’s policy editor, Laura Kuenssberg, said that “a very serious maneuver this weekend that could change everything or nothing” is being developed.

Experts believe that next week the prime minister could lose more control over the Brexit process.

A group of parliamentarians from different parties will press for alternatives to May’s plan that can be debated on Wednesday, something government sources say they are aware of and hope will happen.

In the coming days, some six options, in addition to the leader’s agreement, could be voted on to find out which is the most popular.

The maneuvers are given after Saturday, hundreds of thousands of people marched in London to demand that British citizens have the final decision on the departure of the United Kingdom from the EU. 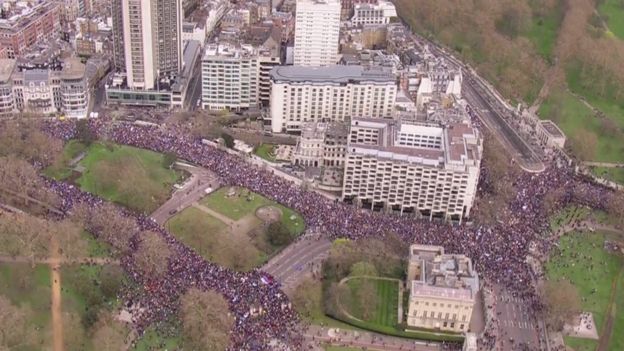 Image caption The organizers said the march brought together about one million people.

The demand of citizens focuses on different possibilities such as the holding of a new referendum on Brexit or, in any case, that any agreement on it is subject to another public vote.

According to the organizers of the ” Put It To The People ” campaign , more than a million people joined the protest that reached the British Parliament.

There was no independent verification of the attendees, but BBC correspondent Richard Lister, who was at the site, said the march had been “very significant” and that the participants could be counted on “well above the hundreds of thousands”. “

The magnitude of the event would be comparable to what is considered the largest march in this century in the United Kingdom, “Stop The War” (Stop the War), held in 2003 against the war in Iraq.

Golan Heights: Trump says it’s time for the US Recognize the sovereignty of Israel over the territories it took from Syria in 1967