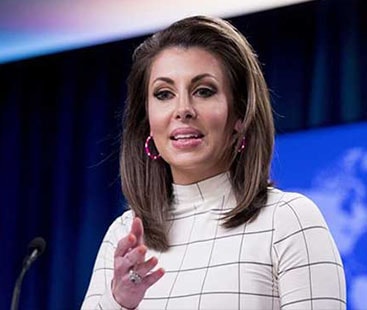 US Department of State Spokesperson Morgan Ortagus said that it is time to build upon the successful meeting of Prime Minister Imran Khan and US President Donald Trump.

The US State Dept spokesman was giving a daily briefing in which she said that PM Imran promised to urge Taliban to negotiate with the Afghan government, calling it an important step.

“I would note one of the things that the prime minister says that he vowed to urge the Taliban to negotiate with the Afghan Government. We are committed to peace in Afghanistan. We think that was an important step,” she stated.

Ortagus further said that in the meeting between PM Imran and President Trump several issues were discussed.

She said that the meeting gave a chance for the president and Secretary of State Mike Pompeo to meet with PM Imran Khan and ‘to build a personal connection and rapport.’

PM Imran recently visited the US in a first official three-day visit. During his visit to Washington, Imran — apart from Trump — met US Secretary of State Mike Pompeo, members of the US Congress, and various businesspeople.

Boris Johnson: time to get serious?