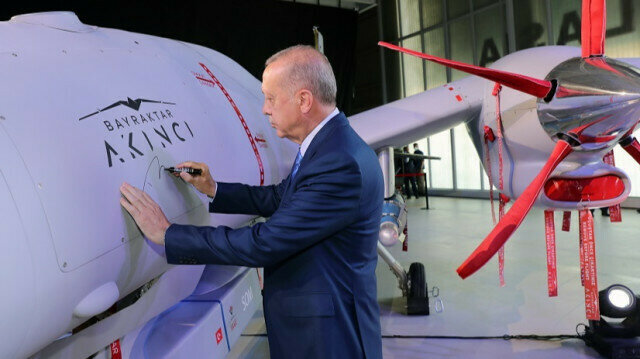 Addressing at the delivery ceremony for the Baykar Akinci combat drone in the northwestern Tekirdag province, Turkish President Recep Tayyip Erdogan proudly claimed that his country had risen to the world’s top three in combat drone technology. The object of developing Akinci UCAV is to land on aircraft carriers with short runways. Erdogan expressed hope that Akinci will help establish trust, peace, and justice in the region as well as the world.

Erdogan’s focus is to make Turkey the leading country in combat done and for this, the country has to invent new technologies. The Turkish president also admired the extensive use of home-sourced defense products which has seen a great surge from 20% to 80%.

The defense companies of Turkey and the drones developed by the country have a heavy demand in the world. There are several countries that are waiting to buy Turkish drones and Erdogan believes that their national technologies can contribute to the security of the allied countries. He said that the aim is to develop the technology humanity can benefit from.

The president thanked the investment and the defense industry countries that helped them grow. He said, “Now it’s time to step up in the technologies of the future, especially in defense industry projects.”

Do you think the technology is a game changer for Turkey?