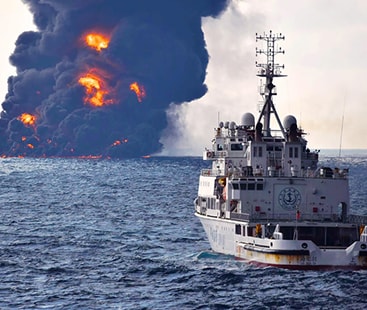 According to media reports, Saudi Arabia has said that two of its oil tankers were attacked in a ‘sabotage attack’  off the coast of the United Arab Emirates.

The incident near Fujairah port caused “significant damage” to the vessels, Saudi Arabia’s Minister of Energy and Mineral Resources Khalid al-Falih said in a statement.

The UAE said four ships of various nationalities had been hit. There were no injuries or deaths.

The Iranian foreign ministry have labelled the attacks as “worrisome and dreadful” and asked for a full investigation.

Tensions are increasing in the area, through which about a fifth of oil that is consumed globally passes.

“Two Saudi oil tankers were subjected to a sabotage attack in the exclusive economic zone of the United Arab Emirates, off the coast of the Emirate of Fujairah, while on their way to cross into the Arabian Gulf,” the SPA state news agency quoted Falih as saying.

Fujairah port is the only terminal in the UAE located on the Arabian Sea coast, bypassing the Strait of Hormuz, through which most Gulf oil exports pass.

How Sudan is becoming the battlefield between Saudi Arabia and Turkey