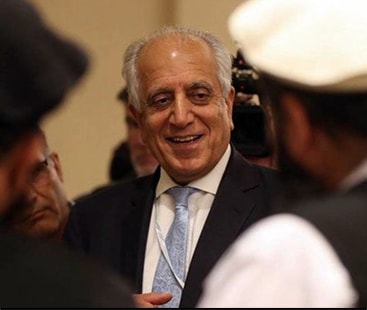 The US military is set to pull troops from five Afghan bases under a proposed deal with the Taliban, the US envoy leading talks with the insurgents said Monday, in some of the first confirmed details of a much-anticipated accord.

Zalmay Khalilzad, who has spent about a year negotiating with the Taliban, said the draw-down would occur within about four months of a final deal being approved — provided the Taliban stick to their commitments.

“We have agreed that if the conditions proceed according to the agreement, we will leave within 135 days five bases in which we are present now,” Khalilzad told Tolo News, according to an excerpt of an interview the Afghan TV station published on Twitter.

The Afghan-born envoy was speaking in Dari, and Tolo said the full interview would be broadcast later Monday.

Khalilzad was in Kabul following the latest round of talks with the Taliban in Doha, after which he said the two sides were at the “threshold” of a deal. He met Monday with Afghan President Ashraf Ghani and showed him the draft of a proposed agreement.

The prospective deal centres on US troop reductions in return for several security guarantees from the Taliban, as well as broader peace talks between the insurgents and the Afghan government and an eventual ceasefire.

Still, even if many of 13,000 or so US troops in Afghanistan leave soon after the deal, President Donald Trump last week said America would maintain a permanent presence — with 8,600 troops initially — even after a deal is reached with the Taliban.

Khalilzad’s discussions with Ghani are key because the Afghan government has until now been largely sidelined from talks, though any eventual deal would require the Taliban to talk to the Afghan leader.

“The efforts of the US and other partners will yield results when the Taliban enters direct negotiations with the Afghan government,” Ghani’s spokesperson Sediq Sediqqi told reporters.

“We hope these efforts will lead to an end to the conflict.”

When asked to describe the deal, Sediqqi demurred, saying “the most important thing is that the Taliban’s violence stops”.

Afghanistan’s Chief Executive Abdullah Abdullah said in a statement he too had been briefed and assured of “a thorough and sustainable peace in Afghanistan”.