WHO warns about the dire need for health aid for Palestinians - Rava.pk
Recent View all
Entertainment
Read more 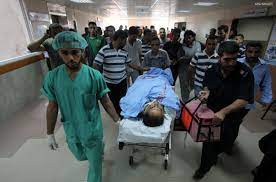 WHO warns about the dire need for health aid for Palestinians

The World Health Organization (WHO) has warned that Palestinians are in the need of healthcare after Israel bombarded Gaza and caused the loss of lives and assets. As Israeli attacks have been going on for the past 11 days, the rocket fire from Gaza has become a routine killing many in Gaza. In total, the Israeli bombings have killed 254 Palestinians which include 66 children and some fighters.

WHO is demanding health aid for approximately 200,000 Palestinians and they have asked for access to health and humanitarian essentials to Gaza to help the people escape. Israel has ruthlessly blocked land and sea access ever since Hamas got the control in 2007.

France applies COVID-19 restrictions on travel from the UK