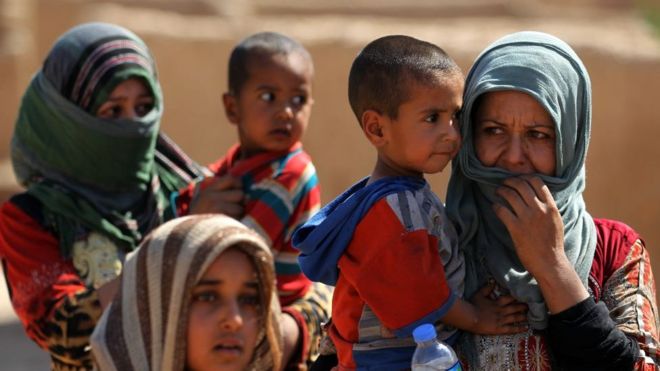 “Used, abused and raped”: women exploited in Syria in exchange for humanitarian assistance

There are women in Syria who are being sexually exploited by men in charge of delivering humanitarian assistance from the UN and other international aid organizations.

Several members of these agencies who work in the field have denounced the situation, explaining that these collaborators force women to exchange food and transportation for sexual favors .

Although a similar panorama of abuses was uncovered three years ago, more recent testimonies show that this reality continues to exist in the south of the country.

The UN agencies and other agencies splashed by the issue claim that they follow a policy of zero tolerance and that they were not aware of any case of abuse by their partner organizations in the region.

But humanitarian workers interviewed by the BBC say that the exploitation is so widespread that some Syrian women refuse to go to the distribution centers because people would assume that they have offered their bodies in exchange for the assistance they receive.

One of them assured that some agencies turn a blind eye to exploitation because the use of local collaborators is the only way to bring assistance to the most dangerous places in Syria, where international staff can not enter.

The United Nations Population Fund (UNFPA) last year evaluated gender-based violence in the region and concluded that humanitarian assistance was being exchanged for sex in various governorates of Syria.

“Women and girls without male protection, such as widows and divorcees, as well as internally displaced women , are particularly vulnerable to sexual exploitation.”

But this type of exploitation had already been reported three years ago . Danielle Spencer, a humanitarian consultant working for a charity, learned of the allegations by a group of Syrian women in a camp in Jordan in March 2015.

He organized a support group with some of them and they told him how men from local councils in areas like Daraa and Quneitra in southwestern Syria, near the border with Jordan, had offered them assistance in exchange for sex.

“They were withholding the assistance that had been sent to them and using these women for sex,” Spencer said.

“Some had experienced it in their own flesh, some were very disconsolate,” he explained.

“I remember a woman crying in a room, she was very shocked with what had happened to her, women and girls need protection when they go to get food and soap and the basic items to live in. What they need least is a man in the that supposedly they must trust and that supposedly must provide them with assistance asking for sex and withholding that assistance . “

He went on to say that the situation was “so endemic that they could not go without being stigmatized.” It was presumed that if you went to one of these distribution centers, you had participated in some sexual act in exchange for assistance.

A few months later, in June 2015, the International Rescue Committee (IRC) surveyed 190 women and girls in Daraa and Quneitra. The report indicated that 40% had suffered sexual violence while receiving services , including humanitarian aid.

According to a CIR spokesperson, the study concluded that the problem was extensive.

The investigations, which have been consulted by the BBC, were presented to a meeting of UN agencies and international humanitarian aid organizations organized by Unfpa in Amman, the capital of Jordan, on July 15, 2015.

As a result of this meeting, some agencies adopted stricter procedures.

The CIR said: “Within our own operations, we are launching new programs and systems to better protect women and girls in southern Syria – those programs continue to be funded by a range of donors.”

An abuse “ignored for years”

Likewise, the charity Care organization expanded its monitoring team in Syria, established a grievance mechanism and no longer gives assistance to local councils.

He also asked several UN agencies, including the United Nations Office for the Coordination of Humanitarian Affairs (OCHA) and the United Nations High Commissioner for Refugees (UNHCR) to conduct more investigations and apply new reporting mechanisms.

However, Care was not allowed to conduct studies in the refugee camps in Jordan.

Danielle Spencer says that the aid sector turned a blind eye to ensure that aid could continue to reach southern Syria.

“The exploitation and sexual abuse of women and girls has been ignored, has been known and ignored for seven years, ” he said.

“The UN and the system, as it is established, have chosen to sacrifice the bodies of women,” he complained.

“Somewhere the decision was made that it was okay for the bodies of the women to continue to be used, abused and violated so that the assistance could be delivered to a larger group of people.”

Another source who attended the July 2015 meeting on behalf of one of the UN agencies told the BBC: “There were credible reports of sexual exploitation and abuse taking place during the border assistance delivery and the UN took no action serious to address the issue or stop it . “

A spokesperson for Unfpa said the agency had heard from Care about possible cases of exploitation and abuse of women in southern Syria. But he said he had not received any reports of abuse or exploitation from the two NGOs he works with there.

The spokesman also made it clear that his organization does not work with local councils as partners in the implementation of assistance delivery .

On behalf of the Unicef child protection agency, a spokesperson confirmed that she was represented at the July 2015 meeting.

The agency said it had conducted a review of its local and subcontracted partners in southern Syria and that it was not aware of any allegations against them so far.

However, he accepted that sexual exploitation was a serious risk in Syria and stated that he was setting up a complaints mechanism for the community and offering more training for his associates.

For its part, a UNHCR spokesperson indicated that the entity had been alerted to the allegations but that at that time there was not enough information to identify and take action against individuals or organizations.

However, he added that he had commissioned a new investigation to learn more about it and that additional efforts were being made to strengthen prevention measures, complaint processes and training for local partners.

The ‘Name’ we carry influences our Personality

Are you Feeling Ugly? The Nightmare of living a life obsessed with your Appearance