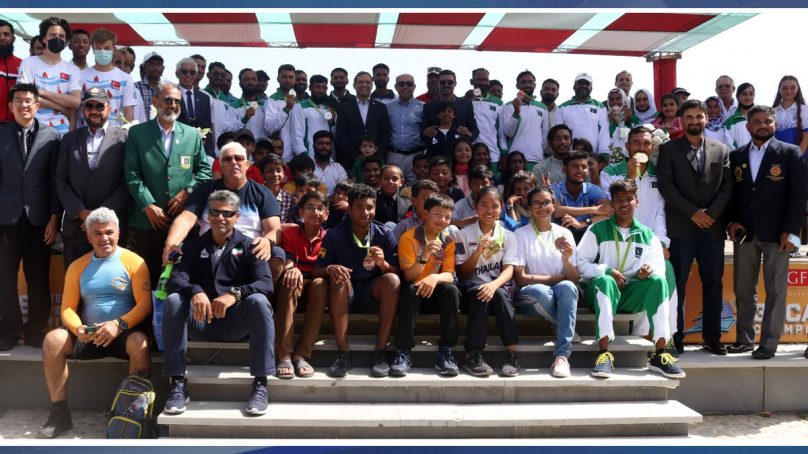 Pakistani sailors dominated the medal table as curtains were drawn on the 3rd Chief of the Air Staff International Open Sailing Championship-2022 being held at PAF Yacht Club, Karachi. The championship was played from 17-20 March 2022 in which 97 sailors and officials from 11 countries participated. PAF Yacht Club is a pioneer institution in the country to promote this exhilarating sport and regularly organizes national and international events in collaboration with Pakistan Sailing Federation. Air Vice-Marshal Shams-Ul-Haq, Advisor Engineering to Chief of Air Staff, Pakistan Air Force was the Chief Guest at the closing ceremony.  Speaking at the occasion, Air Vice Marshal Zubair Hassan Khan, Chairman of PAF Yacht Club, said that the flawless conduct of this competition is the manifestation of PAF’s commitment to promoting healthy activities, not only at the national level but also at the international level.

Addressing the participants the Chief Guest said, “it indeed is a matter of great honor for me to attend the closing ceremony of 3rd CAS Open Sailing Championship 2022. I am pleased to see the immaculate arrangements made by PAF Yacht Club to host this magnanimous event. It has been possible through the sheer diligence, earnest teamwork & unremitting efforts that teams from 10 foreign countries participated in this championship. I formally congratulate all the participants, team & jury members for holding such a successful event. We also look forward to enhanced interaction with our foreign guests in order to bridge the geographical and cultural gaps. I hope that you have enjoyed the diverse culture, rich heritage, and hospitality of Pakistan.”

Later on, the Chief Guest gave away medals to the position holders. In the Laser standard category, all medals were clinched by Pakistani sailors, namely Muzammil Hussain, Najeeb-Ullah, and Allah Ditta. In the RSX category gold, silver, and bronze medals were grabbed by Pakistan’s Qasim Abbas, Sajjad Muhammad, and Mohammad Irfan. In the Laser 4.7 category gold medal was won by Kan Kaeachuen of Thailand, while silver and bronze medals were clinched by Zain Binyamin of Pakistan and Dhanika Saakya of Sri Lanka respectively. In the Optimist category, gold and silver medals were won by Patcharaphan Ongkoloy and Pitipoom Jaroenpon of Thailand, while the Bronze medal was won by Maryam Sajjad Abbasi of Pakistan.