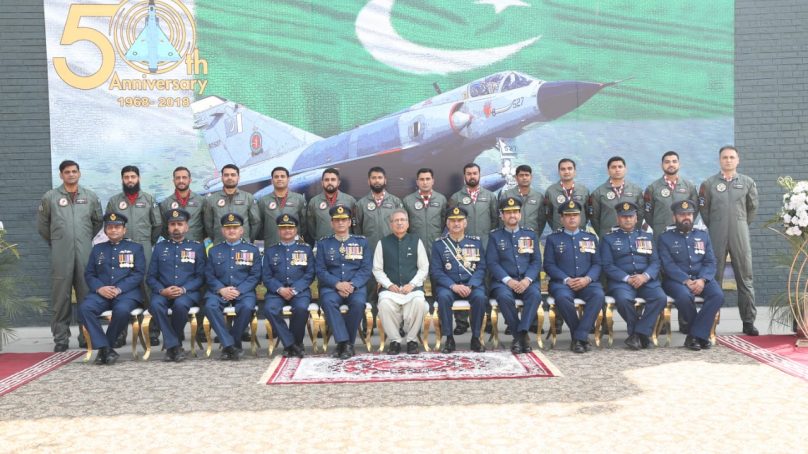 To commemorate 50 years of service by Mirage Aircraft in Pakistan Air Force and pay accolades to No 22 Operational Conversion Unit and No 27 Tactical Attack Sqn for their meritorious services in war time role.

To celebrate “50 Years of Mirage in PAF” and award of Color to two operational Sqaudrons, a graceful ceremony was held at an Operational Base of Pakistan Air Force.

Dr Arif Alvi, President of Islamic Republic of Pakistan, was the Chief Guest on the occasion. Air Chief Marshal Mujahid Anwar Khan, Chief of the Air Staff, Pakistan Air Force was also present at the occasion.

Addressing the audience the Air Chief said, “I acknowledge the vision of our predecessors for keeping the aircraft abreast to meet challenges of modern warfare through up-gradation”. He further said, “Over the years, the Mirage aircraft has amply demonstrated its capability in 1971 War, the two-decade long War on Terror; and recently during Operation Swift Retort. My felicitations to Mirage operators for employing 17 different variants of this legacy platform in various applications of airpower and providing Pakistan Air Force the desired capabilities in air-to-air, air-to-ground, air-to-sea or specialist roles”.

The Chief Guest, President of Islamic Republic of Pakistan, Dr Arif Alvi in his address, appreciated the opportunity to interact with heroes of the Nation. While commending the contributions of Air Marshal Nur Khan and Air Marshal Asghar Khan towards PAF, the Chief Guest said, “For a good Air Force, excellent professionalism and honest leadership is required. For leadership, the vision given by the Quaid should be followed.” He further said, “I was filled with pride on your performance on 27th February, 2019. It was a remarkable job, you are the master of your own destiny despite the fact that aircraft on the other side were advanced. You are second to none. We must increase our defence against our enemies.

An impressive fly past of Mirage fighter jets was the highlight of the event which enthralled the audience during the ceremony which was attended by a large number of serving and retired PAF officers and veterans.