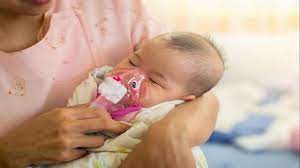 7,000 Children Under 5 Die of Pneumonia in Sindh

Pneumonia took the lives of more than 7,000 children under the age of five in Sindh. As per the health department, 7,642 children have died and 27,136 were children aged five or below. More than 40% of cases have been reported from the rural areas of Sindh and over 60% from the urban parts. Pakistan Pediatric Association (PPA) has reported that pneumonia is the number one cause of death among children, pinning the blame on lack of vaccination at the age of 6,10, and 14 months, which can reduce the incidence of the disease.

These numbers are the representation of the people who have availed of the facilities by the government in the province. According to the senior member of the Pakistan Pediatric Association (PPA), Dr. Khalid Shafi, approximately 90,000 children die every year in Pakistan due to Pneumonia. He added, “We have urged the parents to administer their children Pneumonia (Pneumococcal) vaccine at the right time.”