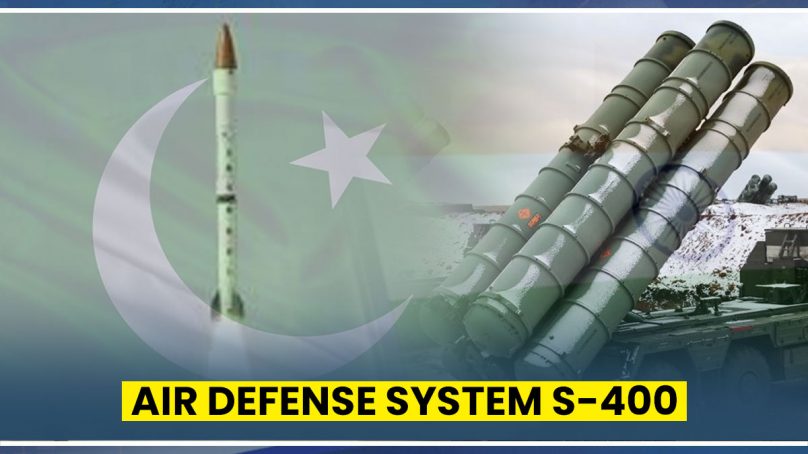 The whole world is aware of the Indian war frenzy and the aggressive intentions to be superior in the region while India is the third-largest country in the world to have a huge amount on defense expenditure. India’s defense budget is Rs. 77.85 trillion. A large part of it is spent on buying all kinds of arms and ammunition from around the world, which is not only upsetting the balance of power in the region but also raising fears for a nuclear war.

Claiming to be the world’s foremost democracy and secular country, the Modi government has left millions of Indians deprived of basic amenities due to hunger and poverty. Instead of spending development budgets on welfare programs for its people, Modi government is building a pile of weapons to fulfill the nightmare of a united India. The state of the Indian Air Force is currently in front of the world and only 31 out of its 42 squadrons can land on the ground.

Recently, India has started the process of deploying the Russian-made Air Defense System “S-400” in the Punjab sector along the borders with Pakistan. There are no two opinions that the installation of this air defense system “S-400” is a strong reflection of Indian expansionist ambitions.

The air defense system is being called a game-changer by India’s top leadership for the Indian Air Force, which remains mostly in negative news, but once again, after Indian defense experts Tejas and Rafale Dale, the Modi government is once again beating its head on the decision. Because China has bought this air defense system from Russia and it has already been installed by the Chinese in strategic locations

India’s top leadership has called the air defense system a game-changer for the Indian Air Force, which has been in the news for the most part but once again, after Indian defense experts Tejas and Rafale deal, the Modi government is once again beating its head on the decision. Because China has bought this air defense system from Russia and it has already been installed by the Chinese in strategic locations.

Russia has also provided Turkey with an S-400 defense air defense system despite all US concerns.

Before that let me tell you why Indian defense experts are so cautious about the air defense system “S-400”.

The Air Defence System “S-400” is a 16-vehicle missile carrier “regiment”. Each of its regiments has two “battalions” and each battalion has two “troops”. Each contingent consists of a total of 4 guards and each vehicle has 4 missile launchers which are used to shoot down aircraft, missiles, or drones.

The system’s radars have the ability to quickly identify any aircraft, missiles, or drones that rise up to 600 km in the air.

Pointing out the shortcomings of this air defense, Indian defense analyst, group Captain TP Shrivastu has strongly criticized it as garbage.

While Dr. N C Asthana, a retired officer, and physician of the Indian Police Service, cited a study by Christopher Bergland, he feared that the system could also be fooled, and its capabilities could be somewhat influenced by the electronic attack.

While this system cannot deter hypersonic missiles, defense experts believe that the S-300 and S-400 systems can hit their target at a certain altitude, so they are only a threat to non-stealth aircraft.

Now that the Modi government has started the process of deploying the Russian-made air defense system “S-400 ” in the Punjab sector along the borders with Pakistan, what options does Pakistan have, and whether Pakistan’s defense system can counter the S-400, Pakistan will now respond to it with MIRV missile technology. This MIRV missile system is known as Ababeel in Pakistan.

Ababeel is Pakistan’s first surface-to-surface medium-range ballistic missile (MRBM), which is reportedly capable of hitting more than one independent target and carrying re-entry vehicles (MIRVs). The first test of the three-stage missile, a solid-fuel missile, was conducted on January 24, 2017.

Let’s take a look at how it works:

The MIRV missile is simply a missile capable of dropping several warheads on different targets simultaneously.

Once launched, the missile soars into the air at high speed and reaches the enemy’s territory, sending all its warheads in different directions towards the targets, which move very fast towards the ground till the wind blows. The force of friction makes it a burning flame and each warhead burn straight at the target.

Now let’s see why Indian defense experts are so worried about S-400:

As the S-400 is capable of tracking any target up to 600 km in the air, Pakistan cannot stop Pakistan’s missiles if it launches it at an equal distance from its border and takes a higher altitude than the range of the S-400 and exits the Coverage Range of this Defence System.

If Pakistan’s Ababeel missile with a range of about 2200 km is to be fired from such a distance that when it enters the Indian airspace at an altitude of more than 600 km and maintaining the same altitude S-400 operational range. The S-400 defense system is of no use if it drops its warhead over targets beyond the limit of 400 km.

Whereas now, if we look at Ababeel’s capabilities in detail, no anti-missile system in the world can stop the warheads of the Ababeel missile, because they become much smaller in size than the warhead missile, which is impossible to shoot down or stop on the way.

However, there is still no defense system in the world that can break the MIRV missile.

If the S-400 defense system tries to immediately target any impending threat, then Pakistan can launch a large number of missiles together or use drones and other such weapons to destroy the S-400 system. This missile system would have given up all its missiles to destroy them, after which this defense system would not be effective in intercepting any type of missile. So, Pakistan can easily target S-400.

However, time will reveal if S-400 is another wrong defensive step of the Modi government in the air defense system on which defense analysts once again have to beat their heads.