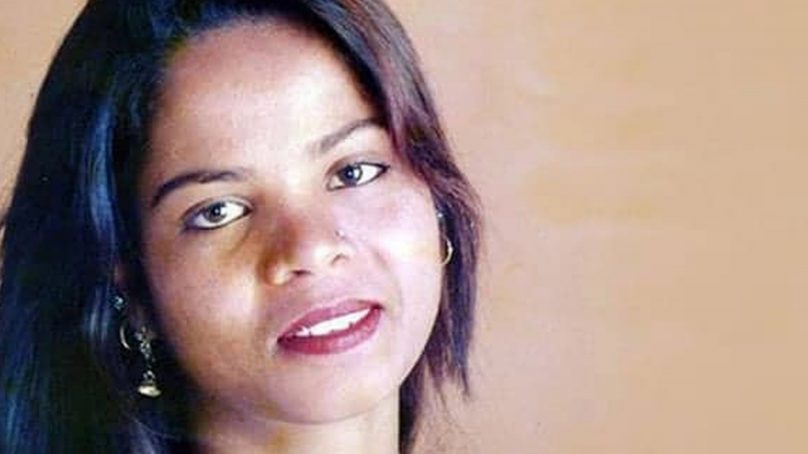 Asia Bibi, a Christian woman who was acquitted by the Supreme Court in a blasphemy case has left Pakistan for Canada, sources confirmed to Geo News on Wednesday.

Sources add that Asia Bibi’s travel documents were made one month ago. Asia Bibi’s arrival in Canada was confirmed by her lawyer Saif Ul Malook to CNN.

Asia Bibi’s conviction was overturned by Pakistan’s highest court on October 31, 2018 in a landmark decision. She had remained in prison as the Supreme Court’s decision triggered protests in the country from religious groups led by the Tehreek-e-Labaik Pakistan. Protesters were called off when the government agreed to impose a travel ban on Asia Bibi and not to challenge a review appeal against the verdict.

In January 2019, the apex court rejected the petition challenging the decision to acquit Asia Bibi. Following the rejection of the petition, Asia Bibi was moved to a secret location.

Foreign Minister Shah Mehmood Qureshi in an interview to BBC in February said Asia Bibi was in Pakistan and a free person.

“She [Asia Bibi] is a free person. The Supreme Court has found her innocent. They have acquitted her,” Qureshi said during the interview.

The foreign minister said Asia Bibi was free to leave, however, the government would protect her for the rest of her life is she choose to remain in Pakistan. “We have asked friends around the world if they want to help her.”

The allegations against Asia Bibi date back to June 2009, when she was labouring in a field and a row broke out with some Muslim women who alleged that she committed blasphemy against Prophet Muhammad (Peace Be Upon Him).

Bibi was convicted of blasphemy and sentenced to death in 2010, despite her advocates maintaining her innocence and insisting the accuser

She was acquitted by the apex court in October 2018.

The chief justice wrote that it was a “well settled principal of law that the one who makes an assertion has to prove it. Thus, the onus rests on the prosecution to prove guilt of the accused beyond reasonable doubt throughout the trial. Presumption of innocence remains throughout the case until such time the prosecution on the evidence satisfies the court beyond reasonable doubt that the accused is guilty of the offence alleged against him.”

The top judge added that the expression “proof beyond reasonable doubt” was of fundamental importance to the criminal justice and was one of the principles which sought to ensure that no innocent person was convicted.

CJP Nisar added, “Keeping in mind the evidence produced by the prosecution against the alleged blasphemy committed by the appellant, the prosecution has categorically failed to prove its case beyond reasonable doubt. The judgments of the High Court as well as the Trial Court are reversed. Consequently, the conviction as also the sentence of death awarded to the appellant is set aside and she is acquitted of the charge. She be released from jail forthwith, if not required in any other criminal case.”

The CJP ended the judgement on a Hadith of the Holy Prophet Muhammad (Peace Be Upon Him) on the rights of minorities.

Further, Justice Khosa “because of some important legal and factual issues involved in the case” decided to record his separate concurring opinion which stated that the prosecution had failed to prove its case against Asia Bibi beyond a reasonable doubt. “This appeal is, therefore, allowed, the conviction and sentence of the appellant recorded and upheld by the courts below are set aside and she is acquitted of the charge by extending the benefit of doubt to her,” he stated.

Justice Khosa’s opinion added, “Blasphemy is a serious offence but the insult of the appellant’s religion and religious sensibilities by the complainant party and then mixing truth with falsehood in the name of the Holy Prophet Muhammad (Peace Be Upon Him) was also not short of being blasphemous.”

“It is ironical that in the Arabic language the appellant’s name Asia means ‘sinful’ but in the circumstances of the present case she appears to be a person, in the words of Shakespeare’s King Leare, “more sinned against than sinning,” Justice Khosa’s opinion read.