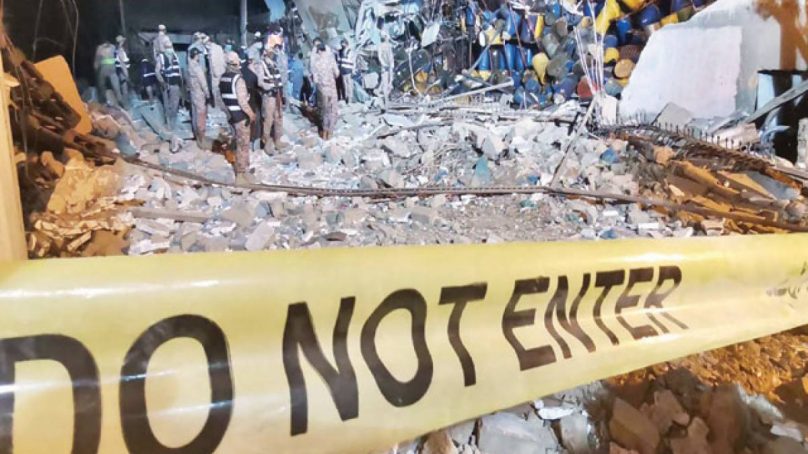 At least 35 injured, 8 killed in blast at Karachi ice factory

After the boiler of an ice factory in the New Karachi Industrial Area exploded on Tuesday evening, at least eight people were killed and more than 35 others injured.

Under the weight of the explosion, the ceiling of the factory, located near Saba Cinema, collapsed and 10 other neighbouring workshops were wrecked.

As rescue personnel arrived and rushed to the rescue of people trapped under the debris, the air was heavy with smoke.

As many as eight bodies have been recovered and transferred to Abbasi Shaheed Hospital (ASH), where Sunny, Muhammad Shabbir, Muhammad Naeem, Muhammad Ramzan, Fazal Karim, and Mohsin have been found. The identities of two others killed in the explosion could not be ascertained till the filing of this report.

The wounded were transported to ASH and other hospitals and an emergency desk was set up in the former to help the blast victims’ families.

The identities of all the injured could not immediately be ascertained. Sakhawat, Akbar, Rajesh, Amina, Sajid, Haseeb, Rasheed, Jaffer, Riaz, Ashraf, Abid, Zahid, Safdar, Shakir, Azhar, Adnan, Yousuf and Sher Ali, were some of the injured persons identified by the filing of this report.

After his visit to the site, Karachi Administrator Laeeq Ahmed cautioned that the number of casualties may increase.

He said two to three factories were affected and expressed concern that the explosion had been triggered by the presence of large quantities of ammonia gas cylinders.

Meanwhile, Saeed Ghani, the provincial labor minister, directed the secretary of his department to investigate the matter and send a report within 24 hours, outlining the cause behind the explosion and the elements responsible.

Chief Minister Murad Ali Shah also expressed his sympathy for the lives lost and ordered the labor department to send a report on whether the ice factory was legal.

The safety teams of the labor department were asked to confirm if the boilers at the factory had ever been inspected and whether the factory workers were registered with the Employees’ Old-Age Benefits Institution.