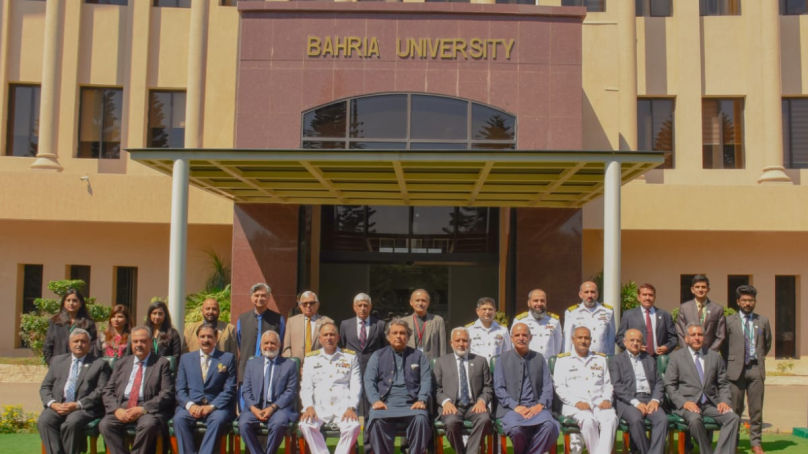 Speaking on the occasion, Mr. Ali Zaidi, the Minister for Maritime Affairs, appreciated the efforts of NIMA for organizing the workshop with an aim to bring out pertinent input for refining policy options for Pakistan. He said that the government is keenly watching the emerging scenario in Afghanistan. A peaceful Afghanistan is in the interest of Pakistan as well as the entire world. The same will help us enhance our regional connectivity with the landlocked Central Asian States. Moreover, increasing trade with the regional countries and boosting economic opportunities in the Maritime domain, should be capitalized on. He emphasized that in order to effectively counter the evolving maritime security challenges, there is a dire need to enhance the capacity and capability of the Pakistan Navy as well as the Pakistan Maritime Security Agency to effectively deal with traditional and non-traditional security threats to our maritime interests in Pakistan’s maritime zones, ports and harbors.

Mr. Moeed Yousaf, in his keynote address, highlighted Pakistan’s dilemma and sufferings during the last four decades of the Afghan war, none of which was Pakistan’s doing. He said that the Taliban government is maintaining law and order in the country; however, the miseries of common people in Afghanistan are gradually cumulating due to emerging economic and logistic crises. Pakistan being the immediate neighbor has no option but to remain engaged with Afghanistan. He said that Pakistan has always been supportive of the concerns and legitimate demands regarding inclusive government, protection of rights of all, and no support to the international terrorist groups. He added that we supported the Doha process to see its successful implementation and hope that world at large would join hands to support the existing Afghan government to bring peace and stability to Afghanistan.

The Vice Chief of Naval Staff, Vice Admiral Faisal Rasool Lodhi, underscored that the evolving situation poses opportunities as well as challenges for Pakistan which demands an in-depth analysis and careful articulation of policy options to safeguard own interests in the fragile situation. India has already unleashed propaganda to discredit Pakistan, which needs to be carefully monitored and countered. The economic crisis in Afghanistan, if not averted, will result in a large influx of refugees subsequently becoming an economic and security challenge for Pakistan. He emphasized that with space on land being constricted, Maritime security threats at sea will increase and the sea space can be exploited by State and Non-State Actors alike, which needs to be guarded against. He said in a strategic plane, Pakistan has to strike a balance between expectations of our own public, the international community as well as Taliban while ensuring that our own interests are preserved. This is like crossing a tight rope but the government has already adopted a well thought out and proactive strategic approach to achieve the ends. We need to realize that history is in the making and Pakistan has to be on the right side of history.

Earlier during his welcome address, Vice Admiral (R) Abdul Aleem HI(M), Director General NIMA, said that the consultative workshop has been organized to deliberate threadbare the post US / NATO withdrawal scenarios in order to further our national interests by overcoming political, security, social and economic challenges that may emerge due to evolving situation.

The eminent speakers who spoke at the workshop on 1st day included, former Ambassador Asif Durrani, Former National Security Advisor, Lt Gen (R) Nasser Hussain Janjua, Vice Admiral (R) Khan Hasham Bin Saddique .and Air Vice Marshal (R) Faaiz Amir. The speakers emphasized the need to intensify the diplomatic and political efforts to keep the Taliban government engaged on a positive note and convince the rest of the world to support stability and peace in Afghanistan. The participants also highlighted the possibility of the use of the sea by the fleeing miscreants from Afghanistan therefore Maritime Security should remain in focus to thwart any aggressive designs of the adversaries.

On the second day of the workshop, Prof Dr. Khurram Iqbal highlighted the strategic environment in the Indian Ocean Region and advised keeping a careful balance between powers operating in the area. He also cautioned about the increased chances of drugs, weapons, and human trafficking in the Arabian Sea. Rear Admiral (R) Farrokh Ahmed HI (M) provided insight about existing security apparatus available in the North Arabian Sea and recommended a cautious diplomatic approach in sync with the expectations of the international and regional community for peace and stability of Afghanistan. Vice Admiral (R) Asaf Humayun HI(M) in his keynote address as Chief Guest for the second day highlighted the challenges to the maritime environment of the Indian Ocean in general and the North Arabian Sea in particular. He said if Afghanistan becomes unstable, nontraditional maritime threats will increase in the Arabian Sea which may impact our maritime economic aspirations. Summing up, he said; Pakistan may exploit potential maritime opportunities in the dynamic situation post US/NATO withdrawal from Afghanistan and in the Indian Ocean region.

In the end, DG NIMA thanked all the worthy speakers and the participants for their valuable input in the workshop.

DWP Group reaffirms its support to NOP scholarships at LUMS