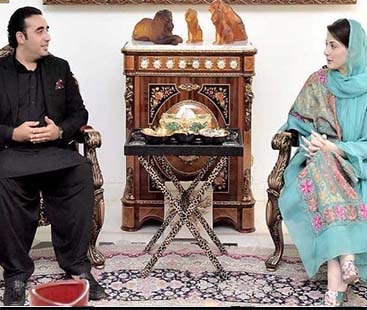 Pakistan Peoples Party (PPP) Chairman Bilawal Bhutto Zardari and Pakistan Muslim League Nawaz (PML-N) Vice President Maryam Nawaz agreed in their meeting at the Sharif family’s Jati Umra residence on Sunday that it was time to take down the government as the budget it had proposed would “cause irreparable damage to the country”.

According to a statement issued after the meeting, the PML-N and the PPP decided that allowing the “incompetent” Pakistan Tehreek-e-Insaf (PTI) regime to move ahead with its budget would cause “irreparable damage” to the country and that was why an anti-government movement was necessary.

The two sides also decided that other opposition parties as well as the coalition partners of the PTI that were unhappy with the government’s performance would be taken into confidence to chalk out a joint strategy.

Bilawal and Maryam agreed to devise a final plan after consulting the other leaders of their parties.

A meeting of the PML-N parliamentary party has been called on Monday (today) for this purpose.

Bilawal and Maryam decided to revive and reinvent the 2006 Charter of Democracy signed between Nawaz Sharif and Benazir Bhutto. They described it as a historic document and agreed to revitalise it in line with the prevailing circumstances.

The two leaders held the PTI government responsible for the ongoing crises faced by Pakistan and accused the current rulers of pushing the country to the brink of disaster through their flawed and anti-poor policies.