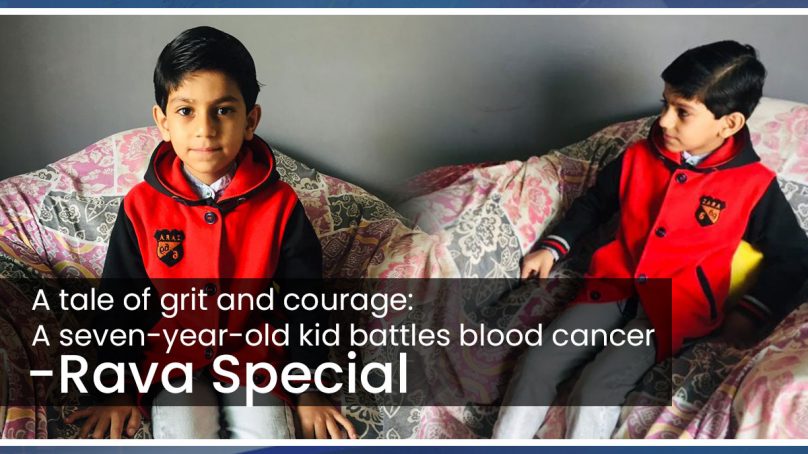 A tale of grit and courage: Seven-year-old battles life-threatening disease

A disease like cancer was considered dangerous in every age and time. If someone heard that he had cancer, they would just touch their ears and their soul would tremble. But now in the modern age where science has progressed so much, a chronic disease like cancer which was earlier considered incurable is now possible to cure with timely diagnosis. However, one must also see the doctor immediately if symptoms start to appear.

Why do young children get cancer of the blood and bone marrow?

Possible causes of leukemia (cancer of the blood and bone marrow) in children include hazardous chemicals found in the environment, ionizing radiation, electromagnetic waves and high voltage power lines.It has become clear that leukemia is caused and spread by a variety of infections. Children who have a weakened immune system are more likely to get it. When the immune system does not have adequate resistance to bacteria and germs in the first year of a child’s life, the chances of developing leukemia are greatly increased. It also involves our daily hygiene routine.

The rava.pk team had a special meeting with a brave young child who was diagnosed with blood cancer. While speaking to us, seven-year-old Owais told rava.pk that he loves cricket and perform Umrah. The young boy also said that he wants to become a soldier when he grows up and also wants to advance in the field of journalism. “I also want to join the army because they save lives.”

Referring to his disease, he said that he has decided to defeat the battle of blood cancer with his courage.

Owais, who is full of life, told rava.pk that he jokes with the nurses of the hospital and teases them. “The doctors there are my friends,” he added.

“I love eating nihari,” said Owais. He said that he misses school a lot due to his illness and cries.

Owais used rava.pk as a platform to give a message of courage to the people suffering from cancer. “There is no need to be afraid of the disease, but just work with courage,” the gritty boy said.

rava.pk also spoke to Owais’s father Nadeem Shehzad, who said that his illness came to us like a horrendous accident.

He said he wants the doctor to tell the parents everything, and parents need to take good care of their children.

“Apart from medicines, the most important thing in this disease is to take special care of their food and drink,” he added.

There are more than 200 types of cancer that cause different symptoms. Sometimes the symptoms are associated with certain types of cancer, but there are also common symptoms, such as weight loss, fatigue and strange pain that cannot be described.

There are some possible symptoms of cancer, such as appearance of a lump. The most common symptom of cancer is nodules. Just because certain symptoms are more common does not mean that they are more serious and more likely to cause cancer.

Numerous seminars, workshops, etc. are conducted for the awareness of diseases like cancer, but it does not affect anyone who has this disease.

How painful it is for a doctor to tell you that you are suffering from cancer when you hear about it. There are still those who set an example of bravery among the people who fought this disease with courage, emerging victorious in this war.

But it is also worth noting that no matter what type of cancer it is, from the initial stage to the last day of treatment, the pain, deprivation, weakness, day and night medications and injections that one has to face is beyond the reach of the average person.

That is why World Cancer Awareness Day is celebrated today. The purpose of celebrating the day is to highlight the importance of preventing the disease and its timely diagnosis. According to medical experts, the incidence of breast cancer is higher in women, prostate and lung cancer in men, and blood cancer in children.

Pakistan Air Force has focused on the importance of education in our society: Samina Alvi