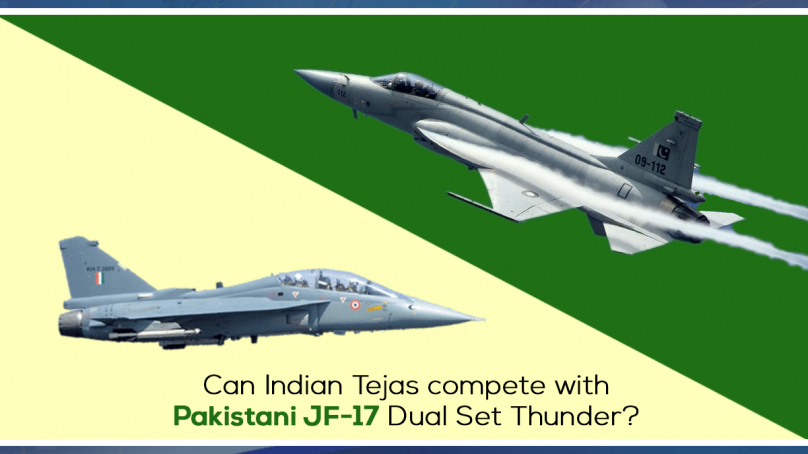 The completion of the dual-seat JF-17 Thunder at the Pakistan Aeronautical Complex Kamra and the official start of production of Block-III has left Indian Air Force and defense analysts perplexed and has also become a moment of reflection for them.

It is a well-known fact that a new imaging infrared (IIR) -based missile approach warning system with a wide-angle holographic head-up display has been installed in Block 3 of the JF Seventeen. Both these technologies have been used in China’s stealth fighters Chengdu JJ Twenty. The Block 3 Thunder also has the option of China’s more powerful WS-13 engine.

However, the story does not end here; rather, it begins here, which has made the JF Seventeen Thunder stand out against the Rafael and Tejas. PL-15 has a range of 300 km, which is certainly more than the 180 km range of the US-made AIM-120 AMRAAM.

This literally means that Pakistan’s JF Seventeen Thunder can hit the enemy from a distance of 300 km, while the declared range of the Meteor missile mounted on India’s Rafale is 150 km. The Tejas will be equipped with R-77 missiles, so it will have to travel a further 107 kilometers, while aeronautical combat also requires a second, according to aeronautical experts.

Perhaps that is why India has announced the addition of its home-made Tejas aircraft to its fleet. According to Indian analysts, if HAL and the Aeronautical Development Agency do not repeat their past mistakes, the aircraft could be handed over to the Indian Air Force in 2024. Referring to the Indian aircraft Tejas, the Indian Air Chief said in a recent statement that the aircraft is superior and better than the JF-17 Thunder, a joint venture between Pakistan and China, but while issuing this statement, he may have forgotten that Former Indian Air Chief BS Dhanwa had said that the Russian-made MiG-21s in the Indian Air Force are 44 years old and the Air Force needs a fleet of modern and best fighter jets to deal with any emergency and combat situation. “Every sensible person would not want to drive a car from 44 years ago because it is dangerous, but we have to fly the same old planes in the air and compete with the F-16,” he added.

If we talk about JF-17 Thunder now, not only has it become a part of the Pakistan Air Force and after the Balakot strikes, Indian mugs have fallen prey to Twenty-One Bison and Sukhoi Thirty, but the eyes of analysts around the world are now fixed on Block III.

According to reports, the head of the Argentine Air Force, Brigadier Xavier Isaac, in a recent interview confirmed the rumors that the country is considering a Block III variant of the JF-17.

Pakistan has already sold the aircraft to Nigeria and Burma, while India’s Tejas has not had much success so far.

In fact, the JF-17 Thunder is an efficient and low-cost single-engine fighter, a great choice for developing countries in the global market. On the other hand, the Mk-1A Tejas manufactured by India’s Hindustan Aeronautics Limited is not gaining much international attention. The biggest reason is that India has built far fewer aircraft than the JF Seventeen Thunder.

Abhijeet Iyer-Mitra, a senior fellow at the Institute of Peace and Conflict Studies, New Delhi, India, says there are many reasons to prefer the JF-17 over the Tejas. First of all, Tejas has failed to impress the Indian Air Force with his performance. If a country wants to replace its MiG-21 to MiG-27 aircraft, or replace the Chinese F-6 or F-7 type aircraft or American F-5 aircraft with new aircraft or get a modern trainer If you want, JF-17 is the best qualified and most valuable aircraft for it.

The Tejas, on the other hand, is a completely confused aircraft and does not fit any well-known market segment. The Indian expert said that Tejas is a nightmare, nothing has been tried and proven. It has been over-tested and does not win the trust of any buyer.

The Indian Air Force has ordered 83 Tejas Mk-1A aircraft this year. The Tejas Mk-1 aircraft that India currently has have been given operational clearance a few months ago and have been added to Squadron 18. The Tejas now have to not only enjoy the fight but also prove their export quality.

So it would not be wrong to say that the thunder and glow of the dual set JF Seventeen Block III will be such that Rafale and Tejas may not even get a chance to recover.