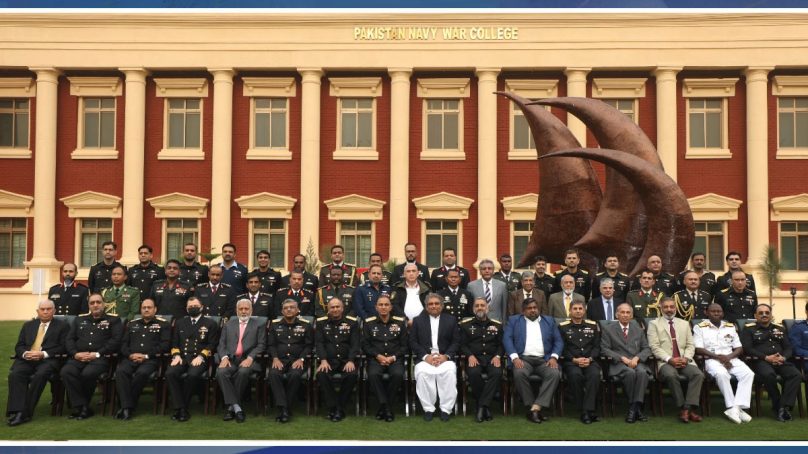 While addressing the audience, the Federal Minister lauded the efforts of the Pakistan Navy in organizing the Maritime Workshop that was much needed for enhancing Maritime awareness and mitigating sea blindness. He acknowledged that Pakistan’s prosperity is deeply linked to the sea and the economic hardships of the country need to be propelled through exploring new economic avenues in the sustenance of ocean resources. He underscored the importance of CPEC as a strategic economic enterprise that will benefit the entire region. The Chief Guest praised the efforts of panelists for recommending a concrete way forward to accrue maximum dividends from the Maritime Sector of Pakistan. The Federal Minister also shed light on various initiatives and projects being successfully spearheaded under the ambit of the Ministry of Maritime Affairs. Towards the end, the Chief Guest awarded certificates to the participants of MARSEW-4.

During the course of the workshop, the participants visited important organizations of the maritime sector including Karachi Port Trust (KPT), Karachi Shipyard & Engineering Works (KS&EW), and Pakistan National Shipping Corporation (PNSC). The participants were also afforded a feel of the sea where they witnessed different naval exercises while onboard the Pakistan Navy Ship during the sea trip.  The participants were also taken to Jinnah Naval Base (JNB) Ormara where they were given a detailed briefing on CPEC maritime related projects and the Pakistan Navy’s reforms and initiatives in the socio-economic uplift of coastal communities in the health and education sector.

The 4th Maritime Security Workshop was organized in two phases and was attended by parliamentarians, senior bureaucrats, academicians, industrialists, and representatives from media besides senior officers from the armed forces of Pakistan. In the first phase, academic sessions on ‘Security dynamics in Indian Ocean Region: Challenges and Opportunities in Pakistan’s Maritime Sector’, ‘Blue Economy & its Contribution Towards Pakistan’s Economic Prosperity’ and ‘Development of Gwadar Port within China Pakistan Economic Corridor (CPEC)’ were held at Pakistan Navy War College. For the second phase, the workshop members visited Naval Headquarters (NHQ) Islamabad, various Pakistan Navy installations at Karachi, coastal, and Creeks Area for orientation and familiarization.

The Closing Ceremony was attended by senior civil, military, and foreign dignitaries.