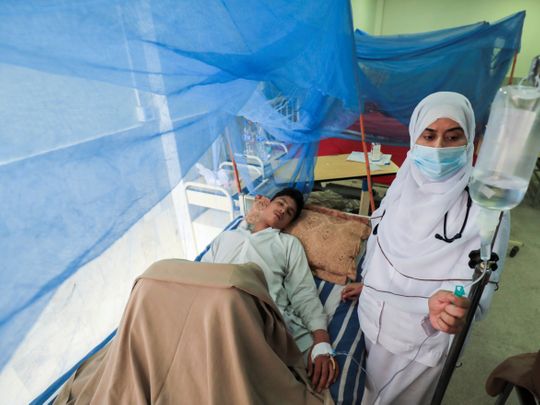 Dengue on the Rise: Sindh Reports 805 New Cases in 15 Days

A staggering 805 cases of the dengue virus have been reported in the first 15 days of November in Sindh. The health department confirmed a new wave of the ‘breakbone fever’ hitting the province. Karachi is on the top of the list with 507 cases; the city’s central districts have recorded the highest number of cases: 146. According to the data compiled by the health department, Malir accounted for 41 cases, Korangi stood third with 124 cases, and Hyderabad registered 144 cases.

On the other hand, the number of dengue cases has decreased in Punjab as the province has reported 103 new cases in the last 24 hours. With respect to the secretary of primary and secondary health Punjab, the province has registered 21,507 cases of dengue fever, 15,732 of the total number have been reported from Lahore and 93 people succumbed to the death against this viral infection.

What necessary measures do you think should be adopted by the authorities to get rid of the fatal virus?

NCOC accepts Chinese vaccines for children aged 12 and above