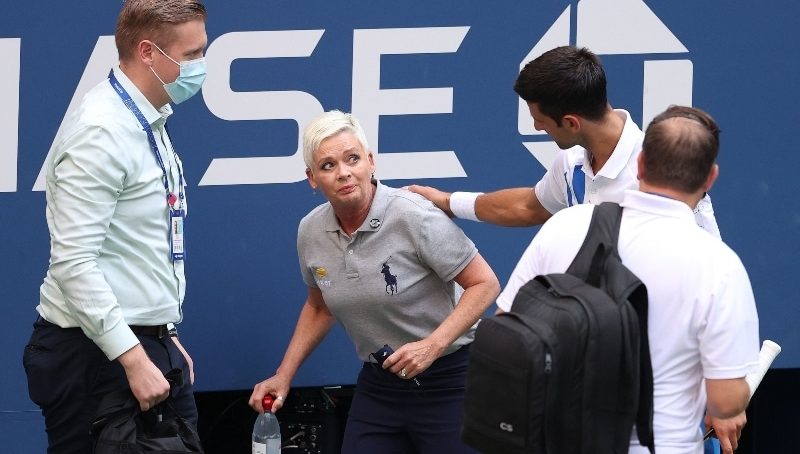 Novak Djokovic was unexpectedly disqualified from the US Open on Sunday after striking a female line judge with a ball in frustration during his last-16 match, sending shock waves through the tournament.

World number one apologized for hitting the ball in frustration after losing his serving to go down 6-5 in the first set to Spain’s 20thseed Pablo Carreno Busta inside Arthur Ashe Stadium.

Djokovic appeared to be looking the other way when he pulled the ball from his pocket and smacked it in the direction of the official, the ball hitting her full toss in the throat.

The official was distressed and started gasping for air as she collapsed to the ground.

As she struggled to breathe, Djokovic rushed to examine her, putting his hand on her back. She got up after a few minutes, and walked off feeling dazed from the court.

Then roughly ten minutes of discussions followed between Djokovic and the tournament referee Soeren Friemel, during which the world number one star pleaded his case.

The umpire then declared that, by default, Carreno Busta had won. Djokovic shook hands with his opponent’s before leaving court, without appearing to shake the umpire’s hand.

He then went back to his car and left New York’s Flushing Meadows site, without talking to reporters.

Djokovic, 33, eventually posted an apology on Instagram saying he was “so sorry.”

This whole situation has left me really sad and empty. I checked on the lines person and the tournament told me that thank God she is feeling ok. I‘m extremely sorry to have caused her such stress. So unintended. So wrong. I’m not disclosing her name to respect her privacy. As for the disqualification, I need to go back within and work on my disappointment and turn this all into a lesson for my growth and evolution as a player and human being. I apologize to the @usopen tournament and everyone associated for my behavior. I’m very grateful to my team and family for being my rock support, and my fans for always being there with me. Thank you and I’m so sorry. Cela ova situacija me čini zaista tužnim i praznim. Proverio sam kako se oseća linijski sudija, i prema informacijama koje sam dobio, oseća se dobro, hvala Bogu. Njeno ime ne mogu da otkrijem zbog očuvanja njene privatnosti. Jako mi je žao što sam joj naneo takav stres. Nije bilo namerno. Bilo je pogrešno. Želim da ovo neprijatno iskustvo, diskvalifikaciju sa turnira, pretvorim u važnu životnu lekciju, kako bih nastavio da rastem i razvijam se kao čovek, ali i teniser. Izvinjavam se organizatorima US Opena. Veoma sam zahvalan svom timu i porodici što mi pružaju snažnu podršku, kao i mojim navijačima jer su uvek uz mene. Hvala vam i žao mi je. Bio je ovo težak dan za sve.