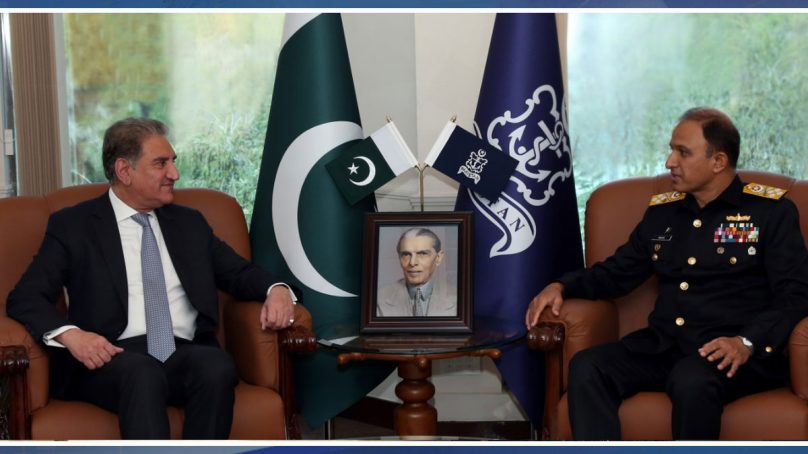 On arrival at Naval Headquarters, the Honourable Minister was received by Chief of the Naval Staff and both dignitaries had a one-on-one meeting at CNS office. The Foreign Minister greatly appreciated the professionalism and operational readiness of the Pakistan Navy and lauded PN significant contributions in achieving Pakistan Foreign Policy objectives through Naval Diplomacy. He assured all-out support of the Government for the Pakistan Navy to meet the evolving challenges in the maritime domain.

Afterwards, the Honourable Minister was given a detailed briefing on Pakistan Maritime Security Challenges geostrategic milieu by Deputy Chief of Naval Staff (Operations) Vice Admiral Naveed Ashraf. The Foreign Minister during his talk at the briefing session added that the Government of Pakistan fully realizes the importance of the maritime sector and its immense economic potential for the prosperity of the country. Foreign Minister praised Pakistan Navy’s contribution to regional maritime sector development of the country. He acknowledged PN efforts for regional maritime security and measures taken to ensure the security of the Pakistan coast, Gwadar Port and maritime related projects of CPEC. The Foreign Minister reposed complete confidence in the preparedness of the Pakistan Navy in safeguarding the country’s sea frontiers.

Chief of the Naval Staff Admiral Muhammad Amjad Khan Niazi thanked Foreign Minister for visiting NHQ and reposing his confidence in Pakistan Navy. The Naval Chief assured that Pakistan Navy shall InshaAllah continue to defend the country’s sea frontiers and maritime interests of Pakistan with honour and valour both during peace and war.