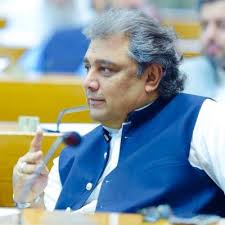 What is the future of Pakistan’s new shipping policy and recruitments? Here’s the stance of Federal Minister for Maritime Affairs Ali Zaidi.

Federal Minister for Maritime Affairs Ali Zaidi has said that the new shipping policy is receiving plaudits from everywhere. He said that not only was the policy being hailed at the national level, but it was also being lauded all over the world.

He said that the objective of the policy is to attract investment in the shipping department, enabling Pakistan to save its annual remittance worth 5 billion dollars, which the country pays to foreign shipping companies in terms of freight.

While discussing the Karachi Port Trust (KPT) employees at length, the minister said that the KPT jobs held by non-Karachiites was a big sham, adding that he could revoke the quota system through an act of parliament.

He went on to say that former shipping minister Babar Ghori recruited as many as 1,000 people in just one night, adding that the matter has been in court since 2012. He said that he wished to see a settlement of this case so that the employees who are upright and who do not possess fake degrees and are working fine could be regularized, because they have been worried about their jobs for eight long years. “

I am least bothered about which political parties these workers belong to; they are Pakistani. I am just trying my best, but there are challenges,” he added.

Mr Zaidi said that when he asked the KPT about the quota, he was told that that it’s a federal government’s organization and it has a quota.

He said that the quota rules have been breached and that he has asked the secretary to write a letter to the KPT and give me the breakup of the entire situation, and about the number of employees, so that the problems can be fixed.

Mr Zaidi said that he knew nothing about the job advertisement, adding that a minister has nothing to do with it. “My work is to formulate policy; I’m not the chairman of the KPT or the PNSE. I have told them to give me a breakup and if they ask for more time, I will then inquire about the advertisement.”

Mr Zaidi expressed hope that the new shipping policy would draw several investors to invest in the shipping industry.