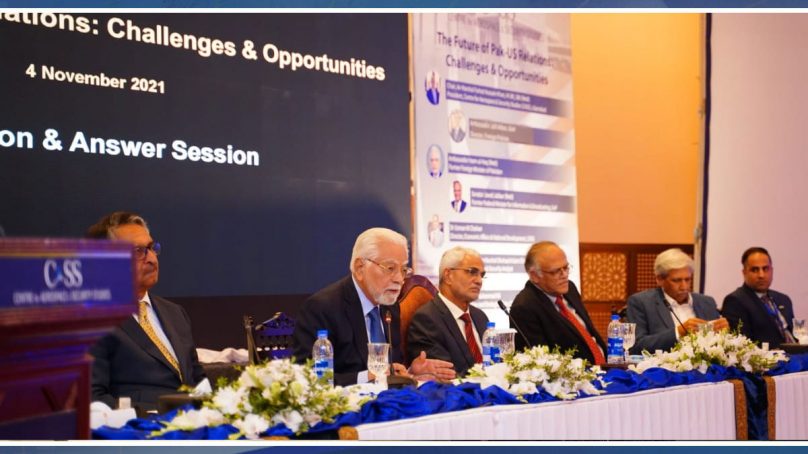 Pakistan needs to put its own house in order, gradually reduce dependence on major powers and negotiate more astutely in order to protect its national interests in changing world order. This was stated by leading diplomats, former senior military officers and eminent intellectuals at the National Seminar on ‘The Future of Pak-US Relations: Challenges & Opportunities” organized by the Centre for Aerospace & Security Studies (CASS) in Islamabad.

Ambassador Inam-ul-Haq, while analyzing the emerging geopolitical dynamics & options for Pakistan, stated that Pakistan’s options, amidst accelerating Sino-US strategic competition, depend upon its ability to set its own house in order, by building its economy and improving its governance. He warned that Pakistan would come under pressure from both sides. He also advised that Pakistan should avoid advocating the Afghan Taliban’s case in the world and argued that they have successfully negotiated with the United States in Doha and are capable of doing their diplomacy so Pakistan should let them do it themselves. He further emphasized the need to focus on domestic social issues including population control, education and health.

Former Senator Javed Jabbar discussed the socio-cultural dimension of Pak-US relations and presented an interesting comparison between the US and Pakistani cultures. He stressed the need to significantly increase Pakistan’s very limited cultural outreach to help improve its international image.

Dr Usman W. Chohan analyzed the future of Pak-US economic relations during which he highlighted the importance of the US as the biggest export market for Pakistan and emphasized the need to improve ease of doing business and bolster institutions to achieve sustainable growth. He also recommended expanding Pakistan’s exports in order to reduce economic dependence on international financial institutions, which was increasingly becoming strangulating.

Air Vice Marshal Shahzad Aslam Chaudhry (Retd), while reviewing the Pak-US security relations said that Pakistan’s military has relied on a combination of high and medium-tech platforms because of the country’s technology dependence on major powers. He further argued that the US’ technological leadership is driven by its human resource, research, innovation and entrepreneurship, and suggested that Pakistan should neither close doors for anyone, nor devise blocs or celebrate someone else’s victory.

Ambassador Jalil Abbas Jilani presented the way forward for Pak-US relations and was of the view that Pakistan was caught in the crossfire between the US-China rivalry and there was a growing fear that it may no longer be able to maintain the neutrality that it had so far carefully maintained. He identified the evolving geo-strategic environment, US-India strategic partnership, Indian lobbying and Pakistan’s close relations with China as key factors that were collectively influencing US policies towards Pakistan. He lauded the growing role and influence of the Pakistani diaspora in the United States and cautioned that the Indian diaspora was now virtually a part of the US political system.

President CASS Air Marshal Farhat Hussain Khan, while delivering the concluding address stated that Pakistan has offered exceptional and unprecedented cooperation to help the US promote its geopolitical and geostrategic interests within South, Central and West Asia. This cooperation had helped Pakistan develop its infrastructure, equip its military forces and receive financial assistance but it had also affected Pakistan’s internal security, damaged its social fabric, discouraged Foreign Direct Investment and made the country economically and militarily dependent. He hoped that the future Pak-US relationship would be based on charting a course that respects the values, national interests and aspirations of both nations, facilitates greater trade and economic cooperation and also recognizes Pakistan’s security compulsions. In addition, he stressed the need to improve the understanding of the political systems

and processes of world powers, the institutionalization of the negotiation process and giving top priority to the national interests in all international engagements.

The National Seminar was well attended by a large number of diplomats, senior military officers, heads of various think tanks, scholars, journalists and students, who actively participated in the question and answer session.