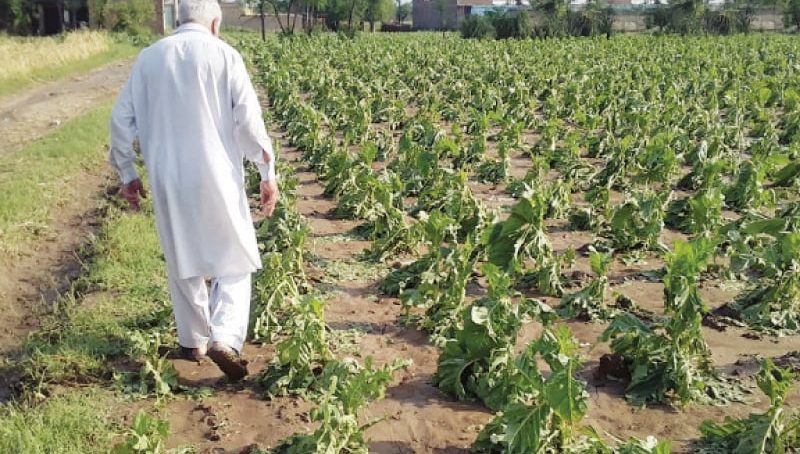 The ongoing heavy rainfall has increased the risk of major crop damage including cotton, onion and other field vegetables, primarily in Sindh, farmers said on Wednesday.

Water-resistant crops such as paddy (raw rice) and sugar cane are still safe though, they added, they may face moderate losses if heavy rainfall takes place over the next few days.

“The current spell of downpour is estimated to damage around 10% or 250,000-300,000 cotton bales of 155 kg each in Sindh,” Sindh Abadgar Board (SAB) Vice President Syed Mahmood Nawaz Shah said while talking to The Express Tribune.

“This is peak time for cotton picking. Farmers engage in initial picking during August and September. Cotton is ready to be picked these days, however, the rainfall is likely to damage the crop,” he said.

Similarly, the risk of onion and other vegetable crops being affected stood high as water-sensitive agricultural products, he said.

“The rainfall in Punjab stands moderate. It is apparently largely beneficial to almost all the crops in the province,” Nawaz stated. The province produces around 70% of all major crops.

The Meteorological Department has forecast more widespread rainfall over the next couple of days.

“The downpour from now onwards is most likely to damage almost all the crops, mostly in Sindh. The probability of damage to water-sensitive crops is high, but it is low for the water-resistant crops,” Shah said.

Crops in the fields received more water as compared to the necessary quantity through the rainfall. Reports say that during the ongoing record-breaking downpour season, the country has received between 100-200 millimeters (3.9-7.8 inches) of rainfall.

On average, the cotton crop gains from 3-3.5 inches of rain. However, 4-5 inches of showers are good for the paddy (rice) and sugar cane crops, according to Shah.

He said, however, if it didn’t rain further under the current spell on Thursday and Friday and then smart winds blew through the cotton belt in Sindh, then the current rain the prove beneficial for the crop and cotton production would go up.

“The blowing of wind is a must for the next couple of days to dry the cotton flower. Suffocation may prove to be damaging for the crop, even if it does not rain more,” he said.