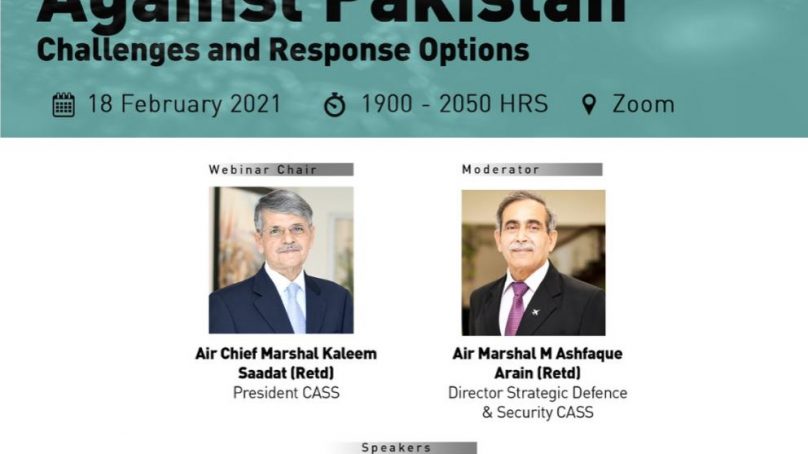 The Centre for Aerospace & Security Studies (CASS) organized an international webinar on ‘Hybrid Warfare against Pakistan: Challenges and Response Options’, here in Islamabad to discuss the complex dynamics of hybrid war that are at play in South Asia and analyze how they are taking a toll on the country’s national security.

In his Introductory Remarks, Air Marshal M Ashfaque Arain (Retd), Director, Strategic Defense and Security at CASS, said that spearheaded by non-traditional use of power centers, not only great powers but various middle powers were also engaging in hybrid warfare to destabilize, demoralize and disintegrate their core adversaries.

Conceptualizing the theory and practice of hybrid warfare, Sir Lawrence Freedman, Professor Emeritus, King’s College London, outlined that sabotage, propaganda and deception had always been part of war strategy and there was nothing new in hybrid warfare. However, he argued that duration, more than decisiveness had become a critical factor in war because if the enemy proved to be resilient, then over time non-military factors become progressively more important. In such cases, the ability to absorb a surprise attack and draw out a war was the winning strategy, he emphasized.

On the subject of ‘India’s Hybrid Warfare against Pakistan’, former High Commissioner of Pakistan to India Ambassador (Retd) Abdul Basit observed that the ongoing 5th generation warfare was all about keeping Pakistan politically unstable, economically weak and regionally and internationally maligning the country; and its objectives ranged from Kashmir to Afghanistan. But this warfare had become more dangerous since India’s Cold Start Doctrine was integral to it. Ambassador Basit also stressed that 5th generation warfare was a double-edged sword as false narratives could not be sustained for long. The recent DisInfo Lab revelations were a case in point. To tackle such campaigns, states like Pakistan needed to formulate a well calibrated national response backed by a well-defined foreign policy, he remarked.

According to Lieutenant General Aamer Riaz (Retd) HI(M), former President of the National Defense University, the fundamental target of hybrid warfare was the social contract between state and citizens in order to gradually incapacitate the target state, and eventually disenchanting its citizens to a point where this trust was broken. Stakes were particularly high if the contest was between two nuclear-armed states because the possibility of hybrid crossing over into a major military conflict always remains, he said.

During the interactive Question and Answer Session, speakers warned that India, with the support of other global powers, would continue to create problems in Balochistan through Afghanistan. To a question, Professor Lawrence Freedman opined that the reason why non-kinetic means of warfare had become important was because kinetic means were far too deadly, but while one could influence events by non-kinetic means, there were limits to what could be achieved.

Offering his Concluding Remarks, President CASS, Air Chief Marshal (Retd) Kaleem Saadat emphasized that Indian hybrid war against Pakistan was a well-conceived and deliberate plan to undermine the country. “Indian political and military leadership as well as the mainstream media are involved and supportive of this operation,” he warned. He said it was important that the social contract between the state and its citizens was implemented. He emphasized that it was imperative to see which of the five key issues given in the Objectives Resolution – freedom, democracy, social justice, tolerance and equality – had been attained, partially, wholly or not at all to understand the internal fissures and cleavages.

Flawed Tejas come across as a shock to Indian Air Force