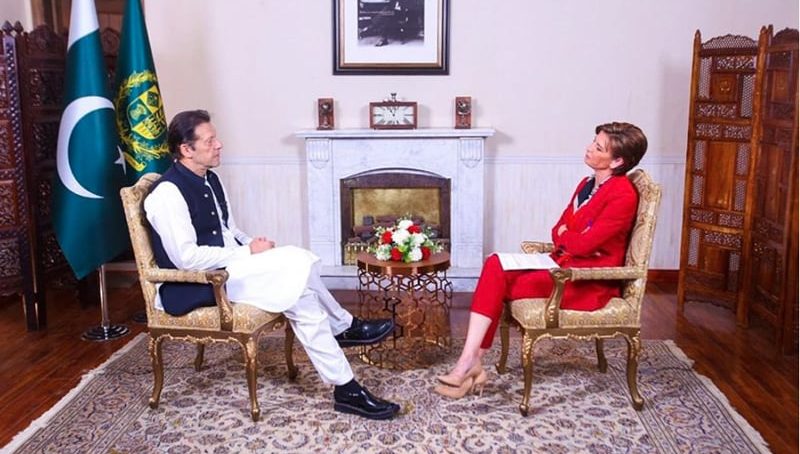 Islamabad, Pakistan (CNN)Pakistan’s Prime Minister Imran Khan said the best way forward for peace and stability in Afghanistan is to engage with the Taliban and “incentivize” them on issues such as women’s rights and inclusive government.

Speaking to CNN from his private Bani Gala residence in Islamabad on Wednesday, Khan spoke about enduring what he perceived as a “terrible” relationship with the United States that has been disastrous for Pakistan and how he is now seeking a more pragmatic approach in dealing with Afghanistan’s new leaders.

It was the Prime Minister’s first interview with an international news organization since the Taliban took control of neighboring Afghanistan last month, following the complete US withdrawal of troops.

“The Taliban hold all of Afghanistan and if they can sort of now work towards an inclusive government, get all the factions together, Afghanistan could have peace after 40 years. But if it goes wrong and which is what we are really worried about, it could go to chaos. The biggest humanitarian crisis, a huge refugee problem,” Khan said.

Khan claimed that the Taliban are looking for international aid to avoid a crisis, which could be used to push the group in “the right direction towards legitimacy.” However, he warned that Afghanistan could not be controlled by outside forces.

“No puppet government in Afghanistan is supported by the people,” he said. “So rather than sitting here and thinking that we can control them, we should incentivize them. Because Afghanistan, this current government, clearly feels that without international aid and help, they will not be able to stop this crisis. So we should push them in the right direction.”

Even before the Taliban’s return to power, protracted conflict, poverty, back-to-back droughts, economic decline, and the coronavirus pandemic had worsened an already dire situation in which 18 million Afghans — almost half of the population — were in need of aid, according to United Nations agencies.

To critics who say the Taliban will destabilize the country, Khan pointed to the withdrawal of the Soviets in 1989, which resulted in a “bloodbath.” Khan said he was expecting a similar bloodbath to happen after the US forces left.

“Our intelligence agencies told us that the Taliban would not be able to take over all of Afghanistan, and if they tried to take Afghanistan militarily, there would be a protracted civil war, which is what we were scared of because we are the ones who would suffer the most,” Khan said. Now, he said, the world should “give them time” to form a legitimate government and make good on their promises. Women in government

Since assuming power, the militant group has attempted to burnish its international credentials, with promises to uphold human rights, particularly regarding women and girls, and allow journalists to continue with their work.

However, women have been omitted from the Taliban’s hard-line interim government, have been ordered to stay at home in some areas, and their education restricted. Protests against Taliban rule and for civil rights have been violently suppressed, with reports of journalists being arrested and severely beaten.

“It’s a mistake to think that someone from outside will give Afghan women rights. Afghan women are strong. Give them time. They will get their rights,” said Khan.

“Women should have the ability in a society to fulfill their potential in life,” said Khan. “In Pakistan, what we have done is we have actually paid stipends to poor families to get the girls to study in school because we feel that if the girls, if the girl child studies, if they have education, they will get their own rights,” he said.

However, many in the international community are not hopeful the Taliban will make any progress on upholding women’s rights. The Taliban, who ruled over Afghanistan from 1996 until 2001 but were forced from power after the US-led invasion, have historically treated women as second-class citizens, subjecting them to violence, forced marriages, and a near-invisible presence in the country.

The group banned women from the workplace, stopped them from leaving the home unaccompanied, and forced them to cover their entire bodies.

In recent days the Taliban has mandated the segregation of genders in classrooms and said female students, lecturers, and employees must wear hijabs in accordance with the group’s interpretation of Sharia law. A Taliban official announced that women would not be permitted to play cricket and other sports. And Taliban fighters have used whips and sticks against women protesters, who have taken to the streets in sporadic protests across the country demanding equal rights.

“In contradiction to assurances that the Taliban would uphold women’s rights, over the past three weeks women have instead been progressively excluded from the public sphere,” UN human rights chief, Michele Bachelet said in Geneva on Monday.

Khan has previously criticized the US’ exit from Afghanistan and said he has not spoken with President Joe Biden since the Taliban takeover, despite Pakistan being a major non-NATO ally.

“I would imagine he’s very busy, but our relationship with the US is not just dependent on a phone call, it needs to be a multidimensional relationship,” said Khan.

That’s something Khan doesn’t feel Pakistan enjoyed during the US’ 20-year war in Afghanistan. “We (Pakistan) were like a hired gun,” Khan said. “We were supposed to make them (the US) win the war in Afghanistan, which we never could.”

Khan said he repeatedly warned US officials that America could not achieve its objectives militarily, and would “be stuck there.” He said the US should have attempted a political settlement with the Taliban from a “position of strength,” at the height of its presence in Afghanistan, not as it was withdrawing.

Pakistan has had deep ties with the Taliban and has been accused of supporting the group as it battled the US-backed government — charges denied by Islamabad. In 2018, Pakistani authorities released top Taliban official Mullah Baradar from jail with the express purpose of negotiating with the US. Last week he was named deputy prime minister in the Taliban’s all-male cabinet.

On Monday, Secretary of State Antony Blinken said the US would reassess its ties with Pakistan following the withdrawal. He told Congress during a House Foreign Affairs Committee hearing that Pakistan has a “multiplicity of interests some that are in conflict with ours.”

“It is one that is involved hedging its bets constantly about the future of Afghanistan, it’s one that’s involved harboring members of the Taliban … It is one that’s also involved in different points cooperation with us on counterterrorism,” Blinken said, Reuters reported.

Khan called such comments “ignorant,” telling CNN that “I have never heard such ignorance.”

As a neighboring country with deep cultural ties, the fate of Pakistan is tethered to that of Afghanistan. Violence, political tumult, and humanitarian crisis in Afghanistan all inevitably spill across the border. For Khan, the US invasion of Afghanistan in 2001 was disastrous for Pakistan.

According to Khan, thousands of Pakistanis lost their lives in terrorist attacks by militant groups owing to his country’s support for the US. “Just because we sided with the US, we became an ally of the US after 9/11 and the war in Afghanistan. The suffering this country went through with at one point there were 50 militant groups attacking our government… on top of it, they must also know there were 480 drone attacks by the US in Pakistan,” he added.

“Only time a country has been attacked by its ally,” he said of the US strikes.

The US has repeatedly accused Pakistan of harboring terrorists and gave them a safe haven, a claim Khan denies.

“What are these safe havens?” Khan asked. “The area of Pakistan along the border of Afghanistan had the heaviest surveillance by the United States drones … surely they would have known if there were any safe havens?”

By not standing up to the US, previous Pakistani heads of state opened themselves up to accusations of collaboration, Khan said.

“The question is, was Pakistan in a position to take military action against the Afghan Taliban when it was already being attacked from inside, from the Pakistani Taliban who was attacking the state of Pakistan?” he said.

Khan said he cannot destroy his country to “fight someone else’s war.”

“The Afghan Taliban weren’t attacking us. I wish if I was in government. I would have told the US that we are not going to take them on militarily because first, we have to serve the people. My responsibility would have been to the people of my country,” Khan said