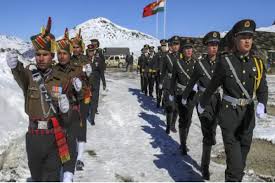 “Positive, constructive” talks on the disengagement of troops locked in a months-long standoff on their disputed Himalayan frontier were held by Indian and Chinese military commanders, both sides said in a joint statement on Tuesday.

After a clash erupted between border forces in June in which 20 Indian soldiers were killed, negotiators and military officials held several rounds of talks to step back from the brink.

Senior commanders held a seventh round of talks in the western Himalayas at Chushul on Monday that lasted more than 10 hours, officials said.

“The two sides had a sincere, in-depth and constructive exchange of views on disengagement along the Line of Actual Control in the Western Sector of India-China border areas,” the statement released by the Indian government said.

“They were of the view that these discussions were positive, constructive and had enhanced understanding of each other’s positions,” the joint statement said.

The Line of Actual Control is the de facto border with the range of troops against each other.

The trouble started early in April when New Delhi claimed that in the Ladakh sector that adjoins the Tibetan plateau, Chinese troops infiltrated deep into India ‘s side of the LAC.