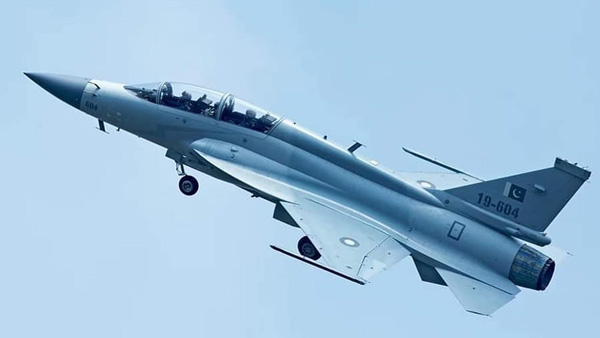 Major progress has been made in the national air defense as the production of state-of-the-art fighter jets JF-17 Thunder Block 3 has started and JF-17 double-seat aircrafts have also joined the Pakistan Air Force fleet.

The Pakistan Air Force’s JF-17 Thunder Block 3 will be operational with the new radar and will be better than the Raphael acquired by India.

A ceremony was held in Islamabad to join the fleet of JF-17 double-seat aircraft and launch of JF-17 Block III manufacturing. Speaking on the occasion, Chinese Ambassador Nong Rong said that JF congratulates Pakistan Air Force on joining the 17th Block-II dual Seat. Pakistan Air Force Block III is a very important project, cooperation in defense production is an example of our friendship.

On the other hand, JF-17 Thunder is already making a thunder on social media. JF-17 Thunder, Shaheen and Pakistan Zindabad trend remained prominent on Twitter while JF-17 was also covered on Twitter as soon as it was launched.

It is not wrong to say that this day is one of the most important days in the history of Pakistan while it is like a nightmare for the enemy.

Here’s what Twitteratis have to say:

It is even modern than the F-16s that are available to Pakistan. #PrideOfPakJF17@TeamNPA1 pic.twitter.com/OH3KADY7TI

“Pakistan will undertake anything which is based on equality. You cannot tie the hands of Pakistan and keep India open. Anything that happens should happen for both countries,” #PrideOfPakJF17@TeamISP__ pic.twitter.com/BGUkkJxXYE

#PrideOfPakJF17
The aircraft is fitted with modern Stores Management System incorporating accurate weapon delivery modes and solutions involving minimum pilot workload. The aircraft is capable of carrying some of the most modern. pic.twitter.com/2HiGRPRxxN

Pakistan is among the few countries which successfully launched the fourth generation fighter jet programs and completed them, Pakistan’s JF-17 Thunder is an example of that. #PrideOfPakJF17@TeamNPA1 pic.twitter.com/TQzVETe76h