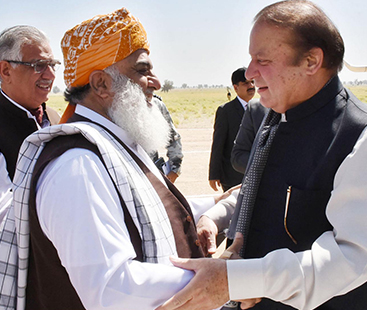 The JUI-F chief will inquire about the health of Nawaz Shareef. He is under treatment at the hospital since October 21 due to fluctuation in his platelets count. Maulana will also breif Naqaz Shareef about the anti-government ‘Azadi March’. Both leaders will also discuss the ongoing political situation.

Besides this, Fazlur Rehman also had a telephonic conversation with Pakistan Muslim League Nawaz (PML-N) president Shehbaz Sharif.  Both f them exchanged views on the status of anti-government march and the latter assured Fazl about PML-N’s complete cooperation for the cause.

“In case the indisposition of petitioner No.2 (Nawaz Sharif) continues, he before the expiry of period of eight weeks may approach the Government of Punjab under Section 401 (2) Code of Criminal Procedure, 1898 and until the decision of the Provincial Government on the application, he shall continue to remain on bail. However, if petitioner No. 2 does not approach the Provincial Government within the period mentioned hereinabove this order shall cease to have an effect on a lapse of a period of eight weeks and the bail granted shall stand revoked/cancelled,” the IHC announced.