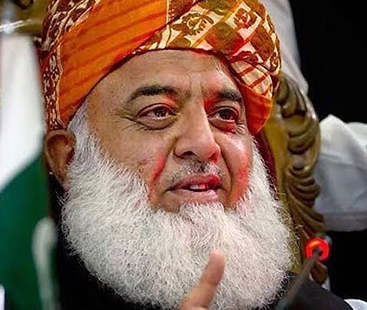 On Wednesday Jamiat Ulema-e-Islam-Fazl’s (JUI-F) senior politician Maulana Abdul Ghafoor Haideri submitted an application with the chief commissioner of Islamabad for carrying out anti-government protest campaign ‘Azadi March’ and a possible sit-in at D-Chowk in Islamabad.

In the written application, JUI-F has maintained that the party owns the “democratic and constitutional” right of holding protests.

“The JUI-F will be holding the Azadi March on October 27, 2019, at D-Chowk, Islamabad, exercising its democratic and Constitutional right under Articles 16 and 17 of the Constitution against the incumbent government,” reads the application.

It further states that more party workers will participate in the long march under the leadership of JUI-F chief Fazlur Rehman.

The party has further asked the local administration to ensure the provision of essential security measures for the demonstrators.

It is pertinent to mention here that the ruling Pakistan Tehreek-e-Insaf (PTI) and its allies have been strongly opposing the proposed ‘Azadi March’ by the opposition rivals.

Pakistan Peoples Party (PPP) and Pakistan Muslim League-Nawaz (PML-N) both the opposition parties are in favor of the long march.

JUI-F’s Haideri, while addressing the media said that in the long march everyoe with age above 18 can participate the long march.