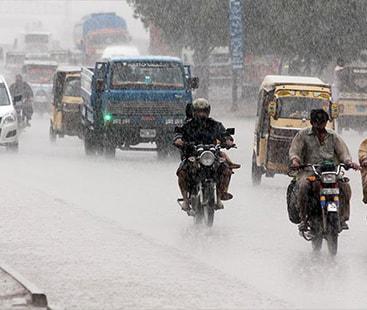 A prolonged spell of rain on Monday brought life in Karachi to a complete standstill and exposed all the earlier claims of the authorities regarding their preparations for the monsoon.

At least 14 deaths were reported due to rain-related incidents in the city while many areas suffered from power breakdown that were still continuing. Also severe traffic jams were witnessed on thoroughfares which remained inundated throughout the day.

A low pressure area had caused rain in southeast Sindh, including Hyderabad, Thatta, Badin, Mirpurkhas and Nawabshah, on Sunday. Under the influence of the same low pressure, rain started in Karachi in the morning hours of Monday and continued till the filing of this report at night.

With 60 millimetres of rainfall, the civic infrastructure of the provincial capital collapsed with power breakdown and inundated roads. The rain forced a large number of people to remain indoors.

The Pakistan Meteorological Department was expecting rain till Tuesday evening and after that light drizzle was expected in the city. There would be another spell of light rain between August 2 and 3 but it would be comparatively lighter than this system,

At least 14 deaths were reported in the city in rain-related incidents, most of which were due to electrocution.