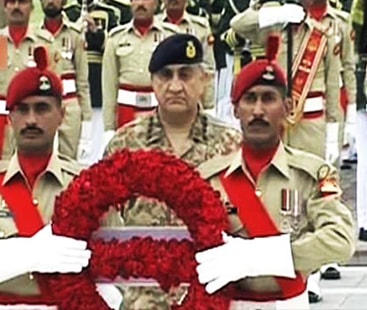 The main ceremony in connection with Defence Day was held at General Headquarters (GHQ) to remember the sacrifices of the martyrs for the safety of motherland.

Addressing the ceremony, Army chief General Qamar Javed Bajwa emphatically stated that Pakistan’s armed forces have not and will not refrain from any sacrifice for the defence of the country. A peaceful and strong Pakistan is our destination and we are steadfastly moving towards that end, he added.

The top military official pointed out that Pakistan registered unparalleled successes in the war against terrorism.

“Our soldiers stood like a rock wall in the war against terrorists and foiled the nefarious designs of the enemy. They sacrificed their today for our better tomorrow,” he went on to say.

Bereaved families of the martyrs have especially been invited to attend the main ceremony that is being held in day time.

It was on this day in 1965 that Indian forces crossed international border in the darkness of night to attack Pakistan but the nation and the armed forces foiled the nefarious designs of the enemy.

PM Imran to hold ‘big’ rally in Muzaffarabad on Friday