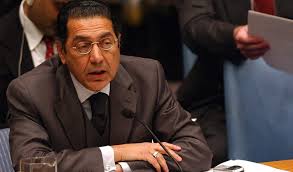 UNITED NATIONS: Pakistan has reminded the international community that, Indian Prime Minister Narendra Modi in his speech to the UN General Assembly, disregarded Kashmir and other major global issues.

On Saturday, the Indian leader addressed the 75th UNGA and requested a permanent seat on the UN Security Council, but deliberately overlooked key global concerns. Pakistan rejected the Indian demand, stating that in a decision-making body like the UNSC, there is no space for “a fascist state.”

Munir Akram, Pakistan’s Ambassador to the United Nations, said in a statement that in his speech, Mr. Modi had carried out trivial issues while excluding those that the world was interested in.

“Modi’s speech was silent on international issues and divorced from the reality of an intolerant, divided, brutal and economically failing India locked in disputes with all its neighbours,” he said.

“The world public is not very interested in how many Indians defecate in public,” he said, referring to Modi’s boasts about the reforms he had introduced, including freeing of 600 million people from open defecation. “This was not an easy task. But India has achieved it,” the prime minister told the 193-member assembly.

India forcibly integrated the occupied Jammu and Kashmir valleys with the Union on Aug 5, 2019, and millions of Kashmiris have remained under siege since then. In Kashmir, gross human rights violations have come under heavy criticism from the UN, international human rights organisations and the media, but in his address, Mr. Modi did not even mention their concerns.

The policy of marginalising minorities, particularly Muslims, by the Modi government has also faced severe criticism across the globe, but this issue has also been overlooked by the Indian Prime Minister.