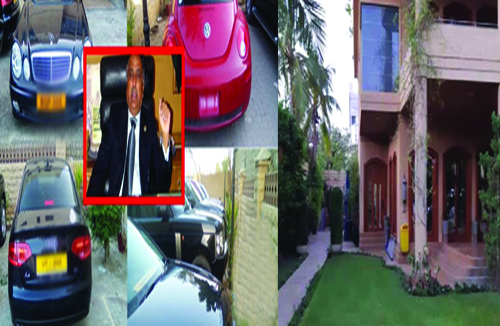 KARACHI: In the fake bank accounts case, Liaquat Ali Khan Qaimkhani, ex-Director General (DG) Parks and Horticulture, Karachi is in under three-day transit remand by the officials of the National Accountability Bureau (NAB) Rawalpindi on Thursday in the Bagh-e-Ibne Qasim scam. Qaimkhani was held by the anti-graft body on Wednesday.

Qaimkhani is a ‘frontman’ of an important political leader. He is accused of providing fake contracts as DG Parks in the metropolis as well as illegally rewarding a plot from land meant for a park in Clifton. He’s an adviser to Karachi Mayor Waseem Akhtar, currently taken in remand in the NAB’s fake accounts case.

He was living in an opulent, palatial residence — worth millions in PECHS with sprawling lawns and a swimming pool. His bathroom alone was spread over two marlas. Among valuables recovered from the former DG Parks’ house were eight imported luxury cars including Landcruisers and Mercedes, gold bangles and necklaces, diamond jewelry, weapons, two 4×6 lockers and files of millions of rupees worth properties in Lahore and Karachi. His shirt had golden buttons and cuff links.

In order to show himself innocent, Qaimkhani said all the drama was false and staged, and all the allegations will be proven wrong by him in the court of law. He added that he has a family and the family shares all the properties, and there is nothing illegal.