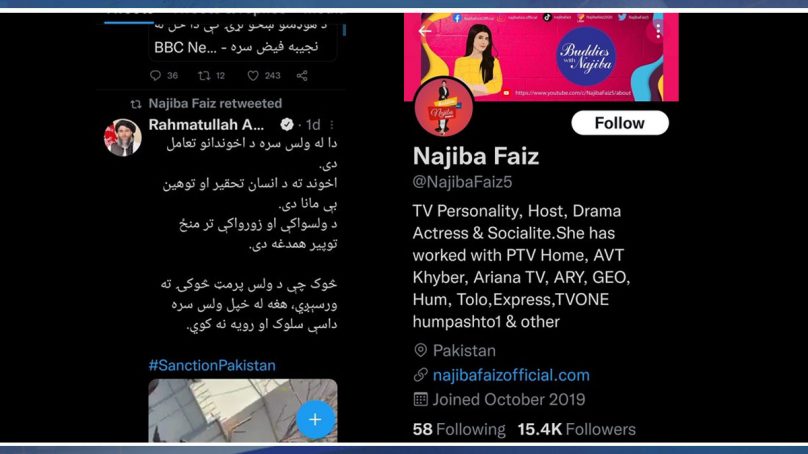 Najiba Faiz, an Afghan-born film and television actor, needs no introduction. She has starred in a number of well-known plays and films.

Najiba Faiz is presently starring in the Sang-e-Mah as Harshali, a Sikh woman, and anchoring a morning show on Pakistan’s most famous entertainment network, Hum TV’s Hum Pashto, which is also garnering rave reviews.

Artists represent their country around the world as ambassadors, image creators, and promoters of positive public opinion. They are expected to be extremely responsible as, being in the limelight, they are the focus of everyone’s attention. And in this age of technology, they have also been able to interact and be in constant touch with their fans around the globe.

Hence when a prominent figure airs views on social media, they immediately get their fair share of likes and dislikes from their fans.And this is precisely the kind of storm unleashed by Najiba’s highly controversial retweet, for which she has come under severe attack.

The major issue of this retweet? The anti-Pakistan hashtag: #SanctionPakistan.

Pakistan’s National Security Adviser Moeed Yousaf and Federal Minister for Information and Broadcasting Fawad Chaudhry, while presenting a report on anti-Pakistan trends on social media, had said that a deliberate campaign was being launched against Pakistan based on false news. There is India, and now the Afghan authorities are involved.

The retweet has sparked outrage on Pakistani social media, with users asking Najiba Faiz to offer clarification in this regard, while also urging the Pakistani government to take action against her.

This is fucking women working on Pakistan tv @HUMPashto1 rt the saction Pakistan trend on her tl and she is living in Islamabad 😠😠😠😠😠😠😠😠😠
Deport her😠@BhittaniKhannnn@WuzgarX@hasankhyber@Pak4Everr@iaqeelyousafzai@rifatorakzai@iihtishamm@janashah_1@Meena_Majeed pic.twitter.com/GOaXRnmRs6

Rava News strongly condemns this retweet by Najiba Faiz and demands an apology from her and deletion of this tweet. We also demand a transparent inquiry into the incident from the management of Hum TV.