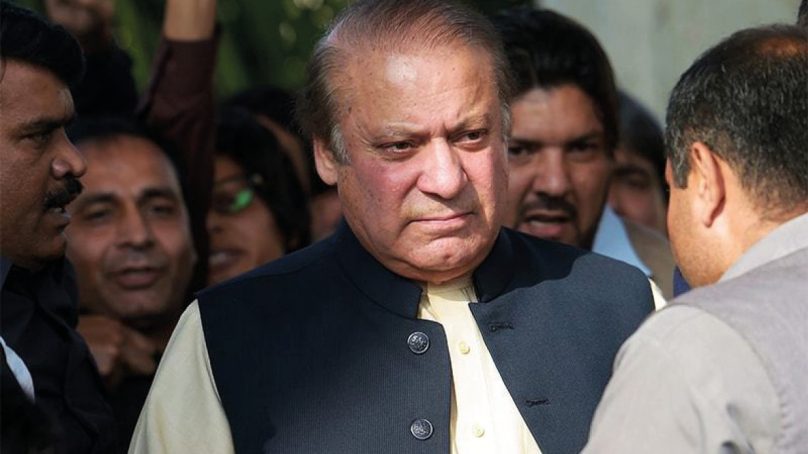 Nawaz’s daughter Maryam and nephew Hamza Shehbaz, along with Mohammad Zubair, Talal Chaudhry and other party leaders, had been accompanying the former prime minister to jail.

Thousands of PML-N workers turned up on the occasion to express solidarity with the party supremo and showered his vehicle with rose petals on way to prison.

This ‘dark night of tyranny’ will be over, says Nawaz

Ahead of his arrival at the prison, Nawaz thanked his supporters for accompanying him to jail at midnight.

“I do not have words to thank you for the passionate way in which you welcomed me,” he said.

“I understand that their passion and prayers will bear fruit, God willing,” the former premier said in his message to his loyalists.

“And God willing, this dark night of tyranny will be over. I have no doubt about this.”

He added: “I will be rid of the dark prison cell through their prayers and I know that they understand what I am being punished for.”

Nawaz further expressed his wishes for the well-being of all his supporters, saying, “You have my heartiest prayers with you, Pakistan Zindabad”.

Maryam tweeted several videos of Nawaz’s loyalists, who gathered to express their support for their leader, and said the passion of party workers was “unbelievable

She said it took them four hours to reach Kot Lakhpat from Raiwind, which was hardly 30-minute drive away.

Took us four hours to reach Kotlakhpat from Raiwind which is hardly 30 mins drive.. Now at the entrance. Thank you Lahore ♥️🤲🏼

Earlier in the evening, jail officials reached Jati Umra to escort the former prime minister to the prison.

The PML-N planned to take Nawaz to the prison with a rally, led by Maryam Nawaz. PML-N spokesperson Marriyum Aurangzeb informed late Monday that Maryam Nawaz will lead the solidarity rally of party workers from their residence in Jati Umra to the jail.

The decision was made by the party’s central executive committee.

Aurangzeb said that Maryam will accompany her father, and will be present in his car. The party has decided that she will remain with her father along with Hamza Shehbaz until he is taken into custody by the jail authorities.

The Home Department Punjab earlier instructed Nawaz to reach Kot Lakhpat Jail by 5pm today, and said his arrival in the form of a rally would be against the law.

Protesting against the instructions, PML-N leader Rana Sanaullah said in Geo News programme ‘Aaj Shahzeb Khanzada Kay Saath’ that Nawaz’s bail is valid till the midnight of May 7, and questioned why the party quaid should have to reach the jail anytime before that.

The party has not issued any call for protest, Sanaullah clarified in the show.

PML-N’s Ahsan Iqbal said in ‘Capital Talk’ that anyone who wished to join the rally would be doing so out of their own will.

The case and Nawaz’s bail

A three-member bench of the Supreme Court headed by Chief Justice Asif Saeed Khosa last week rejected a petition by Nawaz for an extension in the bail granted to him on medical grounds in the Al-Azizia reference.

The court also rejected the former premier’s plea to allow him to travel abroad for treatment.

Nawaz had been granted bail on medical grounds by the apex court on March 26 for six weeks. On April 25, he had submitted a review petition in the Supreme Court seeking a permanent bail.

His bail expired today, May 7.

Nawaz, thrice prime minister of Pakistan, had been in jail since December 2018 following his conviction in Al Azizia corruption reference in line with the Supreme Court’s July 2017 verdict.

An accountability court on December 24 had found the Pakistan Muslim League-Nawaz leader guilty in the Al Azizia Steel Mills reference and sentenced him to seven years in prison.

Ulema were against creation of Pakistan: FawadChaudhry