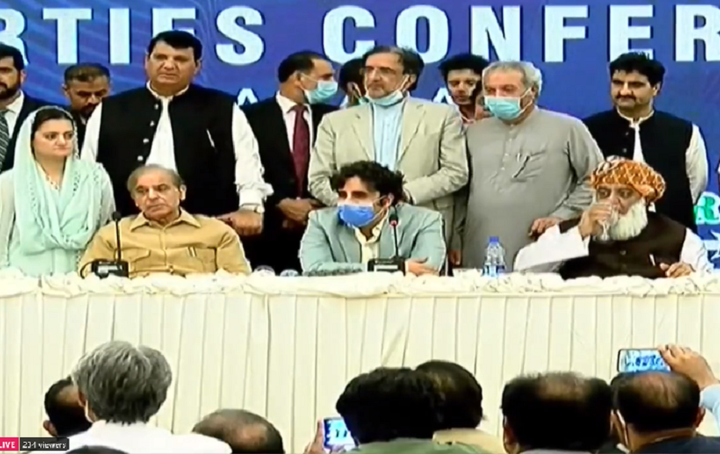 Formalizing their alliance with the name of the Pakistan Democratic Movement (PDM) and demanding the resignation of Prime Minister Imran Khan. The country’s major opposition parties declared on Sunday the start of a three-phase anti-government campaign under an ‘action plan’ beginning next month.

Briefing reporters at the conclusion of the more than eight-hour PPP-hosted Multi-Party Conference (MPC), which was also addressed by deposed Prime Minister Nawaz Sharif and former President Asif Ali Zardari via a video link, the opposition leaders declared that they would use all political and democratic options, including no-confidence motions and mass resignations from parliament.  to seek “the selected prime minister’s resignation and an end to the role of the establishment in politics”.

The details of the “action plan” were presented before the media by JUI-F chief Maulana Fazlur Rehman in the presence of PML-N president Shahbaz Sharif and vice president Maryam Nawaz, PPP chairman Bilawal Bhutto-Zardari and other prominent opposition leaders at a press briefing after the MPC.

Labeling a “rubber stamp” for the present parliament, the JUI-F president announced that the opposition would no longer comply with parliamentary government. He said the opposition parties must pursue the participation of people in the protest movement from all parts of society.

Through the resolution, the opposition parties have demanded the resignation of the retired Lt Gen Asim Saleem Bajwa as Special Assistant to the Prime Minister on Information and a detailed inquiry into the media report on his offshore companies and assets. They said that the investigation would be carried out in the manner it was done with the politicians.

“This meeting has declared that the present selected government has been provided strength by the establishment which had imposed it on the people through rigging in the elections. The meeting has expressed grave concerns over the increasing role of the establishment in politics and considered it a threat to country’s national security and institutions,” said Maulana Fazl.

While responding to questions during the press conference, Bilawal said the PDM needs a non – political government because the Constitution does not allow political matters to be included in the establishment.

The option of resigning from parliament to mount pressure on the government was included in the statement on Maulana Fazlur Rehman ‘s demand, according to the sources. They said Maulana was of the view that they should withdraw from parliament immediately, but the proposal was opposed by the PPP and PML-N.

Some of the politicians, including Mr. Bhutto-Zardari, claimed that Nawaz Sharif should return to the country and that the resignations of the opposition lawmakers should be handed over to him. In a lighter vein Mr. Sharif proposed that they hand over their resignations to Maulana Fazl. But no definitive decision could be made and it was decided that the alternative should be included in the declaration.

Speaking to reporters after the MPC, Maryam Nawaz said her whole party was with Nawaz Sharif ‘s narrative. She said Shahbaz Sharif was the party president, referring to a question if her uncle Shahbaz Sharif himself endorsed this hard-line stance, and he considered the advice of Nawaz Sharif as orders.