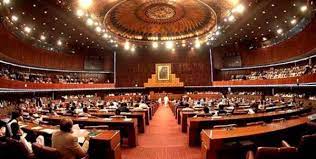 The leader of the Opposition in the National Assembly and PML-N President Shahbaz Sharif is most likely to table the no-confidence motion against Prime Minister Imran Khan in a critical session of the National Assembly today. The NA meeting is taking place at 4 pm today after it was immediately adjourned on Friday’s session and no deliberation of the motion against the premier was addressed. In today’s session, the next subject of discussion is the no-confidence motion after the question hour in 27-point order of the day.

The resolution bearing signatures of 152 opposition members stated, “This House is of the view that the Prime Minister of Pakistan, Mr. Imran Khan, has lost the confidence of the majority of the members of the National Assembly of Pakistan, therefore, he should cease to hold office.”

According to the sources NA speaker, Asad Qaiser is likely to allow the voting on the resolution on April 4 if the resolution is moved. Alongside that, the order of the session also includes bill introduction for a separate South Punjab province.

What do you think will be the result of the no-confidence motion?