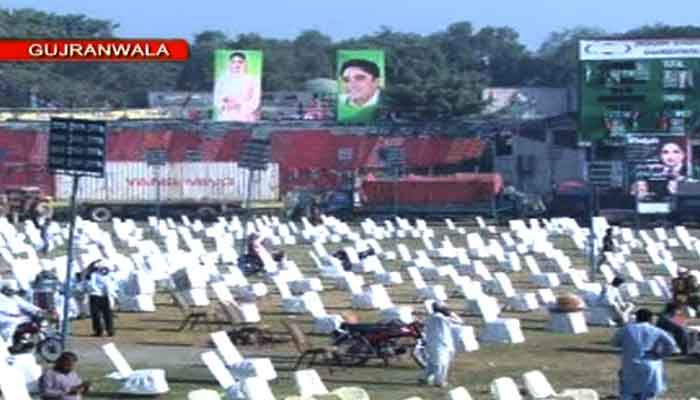 In the middle of the government’s challenge to the leaders of the Pakistan Democratic Movement (PDM) to fill the Jinnah Stadium in the city with its supporters, the opposition parties will hold their first public gathering in Gujranwala today.

Mr. Shibli Faraz had thrown a challenge to the opposition to fill the Jinnah Park with its supporters, instead of just disturbing the public on the roads.

The PML-N, pledging to carry huge numbers of supporters, demanded the federal minister to resign if the venue gets jam-packed.

According to the PML-N, former Prime Minister Nawaz Sharif is also likely to address the rally via video link from London.

After Friday prayers, PML-N Vice President Maryam Nawaz will leave her residence in Jati Umra and reach the venue by 6 pm.

On Thursday, PPP Chairman Bilawal Bhutto arrived at Qamar Zaman Kaira ‘s residence in Gujrat, where he inspected the arrangements for the rally.

Fazl was leaving in the form of a convoy for the venue from Ferozepur Road, Lahore. It would be received at Ichra, Jan Mandir, Bati Chowk, Imamia Colony and Muridke.

In the next few months, the newly formed PDM has declared it will hold a series of protest rallies in major cities to overthrow Prime Minister Imran Khan’s “selected” administration.

“We have ensured that Friday’s power show is phenomenal as this will decide the fate of the PTI government. All leaders of the opposition are convinced that this rally will set the momentum for ouster of the government,” a senior PML-N leader told a private news channel.

Gujranwala Deputy Commissioner Sohail Ashraf granted the PDM a NoC for holding the rally at Jinnah Park. He instructed the public meeting attendees to wear face masks and to practice social distancing.

“As per the notification, the organisers are prohibited to allow the entry of members of banned outfits inside the venue and on stage… (and) their speeches are also not allowed. Slogans and speeches against the state institutions are prohibited,” it says.