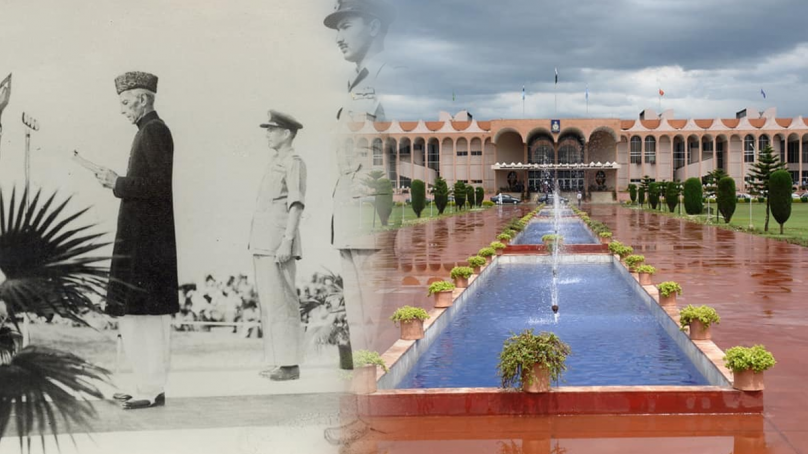 The roots of PAFAA originate back in 1910 with the establishment of a cantonment at Risalpur. Later during WW-I, the Royal Flying Corps was set up at Risalpur, which evolved into RPAF Flying Training School, and the first GD (P) course graduated from FTS on 02 January 1948.

Quaid-i-Azam Muhammad Ali Jinnah, during his visit to Risalpur, elevated FTS to the status of College of Flying Training (CFT) on 13 April 1948. The College was further upgraded to PAF Academy in January 1967 by Field Marshal Muhammad Ayub Khan, the then President of Pakistan. In 1986, the College of Aeronautical Engineering (CAE) was shifted from Karachi to PAF Academy. In 2008, Air Defence Training School was also shifted from Sakesar to become part of CFT.

Today, PAF Academy is reckoned as one of the premier training institutions in the country. Its components, including College of Flying Training, College of Aeronautical Engineering, Military Training Wing, Admin Wing, and Support Wing have been collectively entrusted with the onerous responsibility of training, nurturing, and grooming the entire future of officers’ corps of the PAF. These components are also training the cadets from Pak Army, Pak Navy, and allied countries. Over the years, officers’ training for all branches of PAF has been unified at the Academy, bringing greater harmony and standardization in military and professional training of PAF officers.

Over the decades the PAFAA has kept its glorious traditions and upheld the Quaid’s vision “Pakistan must build up her Air Force as quickly as possible. It must be an efficient Air Force, Second to None.”