Operation Swift Retort: testament to the capabilities of the PAF
Recent View all
News
Read more 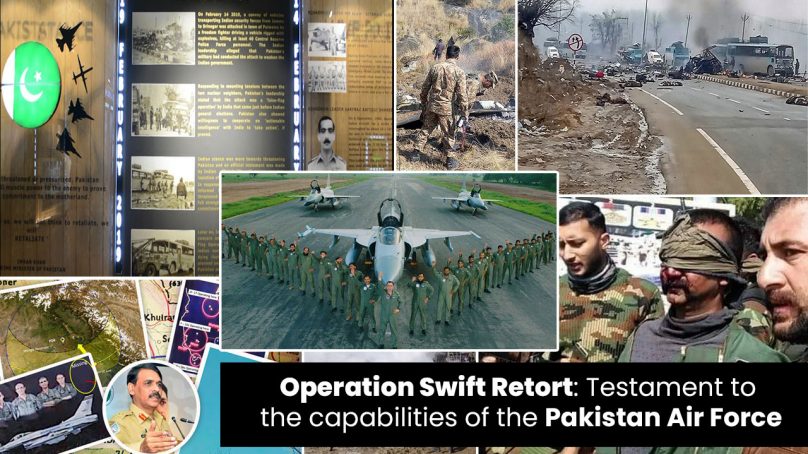 Operation Swift Retort: testament to the capabilities of the PAF

There is no doubt that in today’s modern age the technology of the 21st century has completely changed the war situation around the world. They never came face to face on the front. However, February 2019 saw a dangerous clash when India and Pakistan fully demonstrated their air power.

This air battle is less than the most complex and grim battle of this century. It started on February 14, 2019 when the Kashmiri Mujahideen targeted the Indian army at Pulwama, which led to tensions between Pakistan and India.

The Indian government intended to target the alleged hideout of Pakistani Mujahideen and on the night of February 26, at 1.30 pm, four formations of the Indian Air Force tried to infiltrate into Pakistan’s Sir Creek Rahim Yar Khan Fazilka and Balakot sector. As it was known in advance, Pakistani planes were on security surveillance. These planes were sent to these areas to prevent Indian intrusion.

According to the Indian plan, Pakistani planes were deployed in different sectors and then deliberately turned back to Sir Creek Rahim Yar Khan and Fazalika sector. They were moving towards Balakot with radar planes. Six of the planes were equipped with Israeli-made Spice 2000 bombs, and the rest were aimed at protecting the planes. Due to its long-range capability, Indian bombers flew away from Pakistani aircraft, dropping their bombs and fleeing.

All the Indian planes in the formation went back but a large number of Indian planes were assigned to aerial surveillance of the whole of India to respond to Pakistan’s retaliation. A strange situation arose. Indian planes entered incorrect target information into their aircraft computers, causing all the bombs to fall several hundred meters away from their targets, and thus due to the error of Indian pilots, the so-called modern technology was well planned. The attack failed miserably and the Pakistan Air Force was prevented from retaliating as there was no loss of life or property, but the aggression against an independent state forced the Pakistani government to retaliate. Then finally came the admirable day of February 27th, which will hardly be praised.

On the morning of February 27, Pakistan launched Operation Swift Retort at 9:00 am. Twelve F-16s and eight JF 17Thunder aircraft were deployed to protect the bombers, while the actual bomber formation consisted of two JF 17 and four Mirage. These included the P820, an electronically attack-capable aircraft. And the SAP2000, equipped with modern radar, was also made part of the attack. At 9:20 a.m., Pakistani planes took up position for the attack, which caused unrest and stampede in the Indian Air Force as soon as they saw it on their radar.

Disturbed by the radio jam, the SU30s tried to target Pakistani aircraft with the help of radar. The F-16, which was being flown by Squadron Leader Hassan Siddiqui, was allowed to shoot down an Indian plane, and Hassan Siddiqui successfully aimed the Indian planes at his radar and hit his latest long-range at 9:34 a.m. He fired an MM missile. The Indian SU30 kept trying to avoid the missile but was destined to crash while the other SU30 plane saw the condition of its partner and fled, after which most of Kashmir was at the mercy of the Pakistan Air Force. As soon as news of the crash was received, the Indian Air Force sent an MI-171 helicopter to track it down. The helicopter could not identify itself due to jamming and the Indian Air Force hastily targeted its own helicopter.

The Indian planes had just fled under the pretext of having bad radar. The Pakistan Air Force had started its bombardment at 9:25 am, but the planes under Indian aerial surveillance were notified at 9:45 am with a delay of 20 minutes. The Indian Air Force will probably never have the answer, but it is certainly a big question mark on its defense system. As soon as the five MiG-21s flew from Srinagar to the Line of Control, they used their radios to inquire about the position of the Pakistani aircraft. The guests were greeted by the noise of Pakistani jammers. Not heard because of the magnificent jamming, these mugs were not able to do anything.

The Indian Air Force ordered the MiG s to return, but a MiG aircraft that could not hear the orders due to a radio jam and headed for the Line of Control at 9:50 a.m. as soon as the plane crossed the border. The Pakistan Air Force ordered its F-16 to shoot it down. This F-16 of the Pakistan Air Force fired another MM missile and it went straight to the Indian mug. The plane crashed into Pakistani territory and its pilot ejected himself and saved his life and the pilot named Abhinandan stayed with Pakistan as a prisoner of war and drank the tea that is now known to the world as Fantastic Tea. After this heavy loss, the Indian Air Force withdrew from the battlefield and withdrew. He refrained from shooting down more planes even though the entire field was in the hands of the Pakistan Air Force at that time because the government of Pakistan did not want to worsen the situation.

The war lasted only 30 minutes, but it was the most dangerous and complex air battle of the twentieth century, a testament to the capabilities of the Pakistan Air Force.