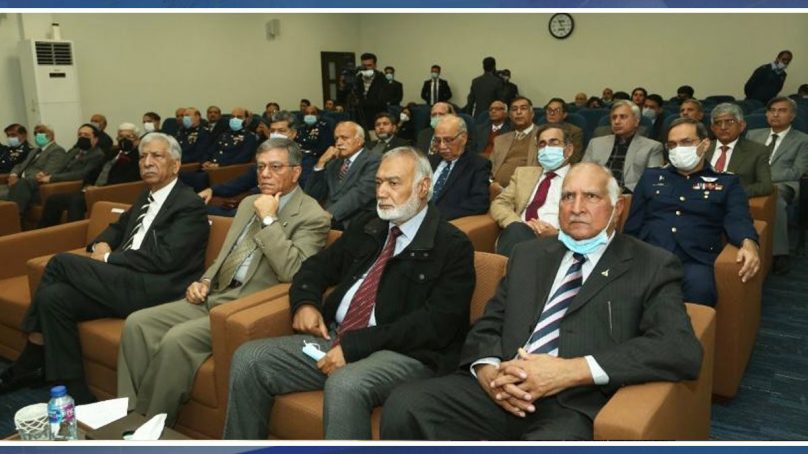 “Mr. Jinnah was right” when he wanted “Peace within and Peace without” for Pakistan to make its rightful place in the comity of nations. He was right when he desired an Air Force “Second to None” for Pakistan. This was the key message of former senior Pakistan Air Force officers and eminent diplomats at the National Seminar on “PAF’s Saga in December ’71 Air War”, organized by the Centre for Aerospace & Security Studies (CASS) in Islamabad.  Air Marshal Masood Akhtar (Retd), former Deputy Chief of Air Staff (Training), PAF was the Keynote Speaker, while other eminent speakers included Ambassador Khalid Mahmood, Chairman Board of Governors, Institute of Strategic Studies, Islamabad (ISSI); Air Commodore Jamal Hussain (Retd), PAF veteran and Defence Analyst; Ambassador Afrasiab Mehdi Hashmi Qureshi, former High Commissioner of Pakistan to Bangladesh, Bhutan, and New Zealand. The seminar was chaired by President CASS Air Marshal Farhat Hussain Khan (Retd), while Air Vice Marshal Faheem Ullah Malik (Retd), Director Warfare & Aerospace moderated the proceedings.

Outlining why it was important to re-tell the stories of those PAF officers who had sacrificed their lives for the nation in the 1971 War, President CASS Air Marshal Farhat Hussain Khan (Retd) highlighted that the seminar was organized because of their exceptional devotion, valor, and sacrifice remained overshadowed by the great national catastrophe. “It is imperative to communicate to the younger generations PAF’s repeated admirable performance in times when all others had gone under,” he said.

In his Keynote Address, Air Marshal Masood Akhtar provided an overview of Pakistan’s political environment after Quaid-i-Azam’s demise in both East and West Pakistan, the overall defense establishment construct, build-up of armed forces in general and PAF in particular, he pointed out that in the backdrop of 1971, we often shy away from looking at the constraints on PAF and how in spite of all those, the PAF performed above par.

Analyzing the global and regional geopolitical environment between March and December 1971, Ambassador Khalid Mahmood described that Pakistan had overwhelming diplomatic support from the United Nations General Assembly members during the 1971 crisis. However, it was in the Security Council, where veto power was repeatedly exercised by Russia to support India and to weaken Pakistan’s position, while China’s role in the security council, in our favor, was of pivotal importance. Turkey, despite not being a UNSC member, also provided the utmost moral support.

On the issues facing Pakistan domestically during 1971, Ambassador Afrasiab highlighted that internal political mismanagement, fragile economic conditions, absence of social justice, poor law and order, and leadership’s incompetency played a major part in fermenting the conditions that led to East Pakistan’s secession.  He warned that even now, the world was increasingly moving towards religious fascism. 1971 was a tragedy but Jinnah’s vision was 100% accurate since the Two Nation Theory remains alive to this day, he concluded.

Air Commodore Jamal Hussain (Retd) analyzed the strategy and operations involved in the air campaign during the 1971 war and paid tribute to the gallant pilots, maintenance, and support elements of No 14 Sqn in Dhaka, along with the air defense radar controllers and ack gunners. He stressed that despite the final tragic outcome, based on the available data, PAF’s performance in 1971 was at par, if not better than it was in 1965, given its professionalism and level of training.

Giving the Concluding Address, President CASS Air Marshal Farhat Hussain Khan (Retd), agreed with all the speakers’ analysis that the unfortunate breakaway of East Pakistan did not happen overnight, rather it was a culmination of mismanagement and failures of various aspects of internal and external policies, diplomacy, governance, and political polarization.  He said that post-1971 war, despite the various impediments, PAF has continued to build her capacity as per the prevailing threat perception and operational concepts. Air Marshal Khan pointed out that the conflicts of the future would not be fought on the ground, rather in the cognitive domain. He appreciated that the PAF was very mindful of these changes, hence, non-contact warfare, use of AI, cyber and space, had gained a prominent position in her concepts.

The seminar was attended by senior serving and retired military officers, war veterans, and scholars who actively participated in the interactive Question and Answer session.