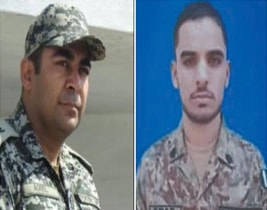 RAWALPINDI: A Pakistan Army officer and a soldier were martyred when an Improvised Explosive Device (IED) went off on Pak-Afghan border,  the Inter-Services Public Relations said on  Friday.

According to the ISPR, Major Adeel was a resident of Karachi while Sepoy Faraz belonged to Kotli, Azad Kashmir.

He said the martyrs fell victim to an “IED   by terrorists from across the border”.