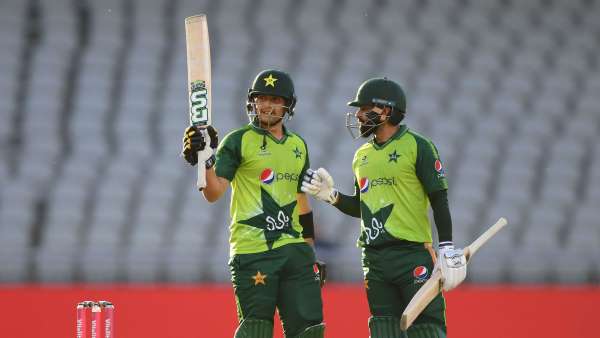 Pakistan concluded their England tour on a good note when, on Tuesday night, they defeated England with five runs to share honors in the Twenty20 International three-match at Old Trafford.

It was Pakistan’s first win in England in 66 days and meant they squared this three-match series at 1-1 after suffering a 1-0 defeat in the three-test series last month.

There was a 20-year age gap between the 39-year-old Hafeez and the 19-year-old Haider, but it was hard to note the disparity as they shared a stand of exactly 100 after 32-2.

In the second T20 at Old Trafford on Sunday, Hafeez’s knock preceded his 69 in England’s five-wicket win, and was his fourth half-century in his last five T20 international innings.

England were 69-4 in their chase before Moeen Ali, who was supposed to be out for seven, rekindled their hopes with 61.

But when veteran paceman Wahab Riaz ran out Chris Jordan in for the injured Mohammad Amir and then caught and bowled Moeen, England was 174-8 left with seven balls.

As Tom Curran hit a six, they needed 12 from two balls.

But Curran was unable to repeat the shot when Haris Rauf bowled down a yorker with the match’s last ball.

England endured a setback just four balls in their chase when a splendid yorker from left-arm Shaheen Afridi bowled Jonny Bairstow to a duck.

Dawid Malan, fresh from his unbeaten 54 on Sunday, was beautifully caught near the boundary rope by a leaping Fakhar Zaman after he hoisted left-arm spinner Imad Wasim.

England’s captain Eoin Morgan looked in fine shape after his 66 on Sunday but after a disastrous mix-up with Tom Banton he was run out for just 10.

And when Banton was in lbw for 46, including eight fours, England started to struggle at 69-4 on Rauf ‘s review.

Moeen should have been out when he went down the pitch to Imad but the quick stumping was fumbled by former Pakistani captain Sarfaraz Ahmed, who was selected in place of in-form wicketkeeper Mohammad Rizwan.

It was the cue for left-handed batsman Moeen to unleash a blistering attack as he tallied a 25-ball fifty with two fours and four sixes in it.

After Morgan won the toss, off-spinner Moeen bowled Fakhar with his first match ball. But Haider slogged for six on his second international cricket ball, from Moeen.

Pakistan’s top-ranked Twenty20 batsman, captain Babar Azam, followed his 56 with a fast 21 on Sunday before he was bowled by Curran.

Haider hit the first ball from all-rounder Lewis Gregory for an exquisite legside pick-up six that plummeted over the longest boundary.

Hafeez followed up with two six off consecutive leg-spinner deliveries from Adil Rashid before Haider went to a 28-ball fifty with a pulled four off Gregory.

Hafeez then drove Rashid for six and swept him for four to end a 31-ball fifty, before Jordan bowled Haider.