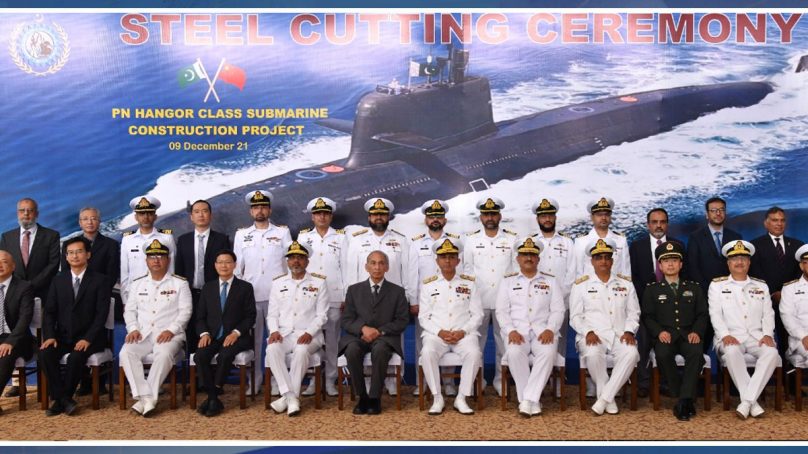 Pakistan Navy celebrates Golden Jubilee of HANGOR Day, which is reminiscent of the heroic act and unrivaled courage of Pakistan Navy’s Submarine HANGOR and to pay tribute to our veterans of the 1971 war. The remarkable naval action took place southeast off ‘Diu Head’ on the West Coast of India. The event is distinguished in naval history as the first successful kill by any submarine after WW II.

In order to commemorate the Golden Jubilee on completing 50 years of the sinking of the Indian Navy Ship KHUKRI, an impressive ceremony was organized by Pakistan Navy at Karachi. Chief of the Naval Staff Admiral Muhammad Amjad Khan Niazi graced the occasion as Chief Guest. Vice Admiral (Retd) Ahmad Tasnim, then Commander graced the occasion as Guest of Honour.

While addressing at the ceremony, the Chief of the Naval Staff underlined that Pakistan Navy is ready to respond to any threat and misadventure posed by the adversary. The HANGOR’s triumph serves as a lesson to the enemy and a testimony of the highest standard of professionalism and selfless devotion of our veteran submariners. Naval Chief highlighted HANGOR’s valor during the 1971 War that remains the pride of the Pakistan Navy, as the action was not only a spectacular tactical battle executed perfectly, but it was in the strategic domain that Indian aggressive designs were effectively neutralized. The Admiral added that the sinking of INS KHUKRI plummeted the morale and will of the Indian Navy to engage further in the battle. The Naval Chief also underscored that the inspirational role to our veterans, dauntless sacrifices, and daring acts have helped transform Pakistan Navy into a ‘force to reckon with’.

The valiant hero, Vice Admiral (Retd) Ahmad Tasnim who led the intrepid action also addressed the audience. He attributed the success to the entire team members who formed stepping stones to achieve the final kill. The ceremony was attended by HANGOR’s veterans and a large number of senior serving and retired Naval Officers.

Commemorating the Golden Jubilee of HANGOR Day, steel cutting of the 5th HANGOR Class Submarine, the first to be built indigenously in Pakistan, was also held at Karachi Shipyard and Engineering Works (KS&EW).

The in making HANGOR Class Submarine is capable to undertake war and peacetime roles as per Maritime dictates. The Submarine possesses advanced stealth features to operate under a multi-threat environment and its state-of-the-art sensors are integrated with Command & Control system which can simultaneously track engage several targets at standoff ranges. The Submarine would be named PNS TASNIM upon commissioning, in honor of the heroic action of the HANGOR crew led by Vice Admiral (Retd) Ahmad Tasnim.

On the occasion of the Steel cutting ceremony, the Chief of the Naval Staff expressed gratitude to all involved in construction activities and termed the occasion as another event of deepening the relation of Pakistan and China. The Steel Cutting ceremony was attended by representatives of DA China and other high-ranking officials including distinguished guests from the Embassy of China in Islamabad, MoDP, Pakistan Navy, and KS&EW.

On 50thHANGOR Day, a promo of a special Telefilm ‘HANGOR S-131’ depicting the daring action of PNS/MHANGOR was also released. Besides, a submarine seminar on ‘Technological Advent In Artificial Intelligence: Impact On Sub-Surface Domain’ was also held at Jauhar Auditorium Karachi, highlighting the shape of PN submarine force over the next decade after induction of 8 x HANGOR class submarines and SWATS. Other major activities of the celebration included the launching of the book ‘Story of PNS HANGOR’ authored by Rear Admiral (Retd) Mian Zahir Shah and the issuance of a commemorative stamp and a coin.