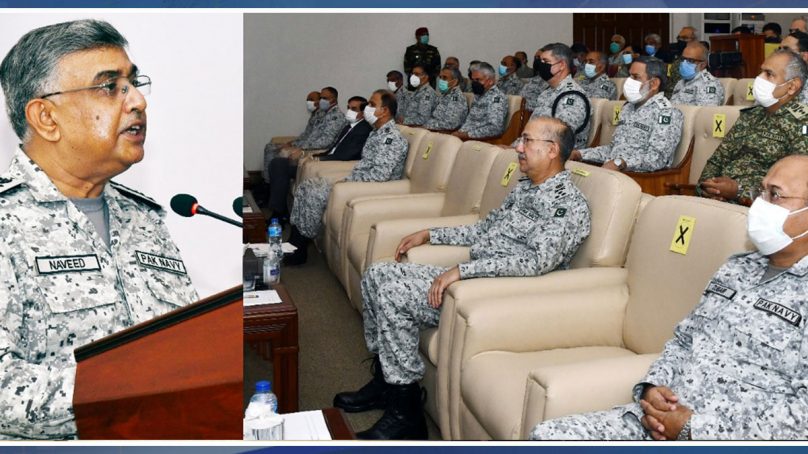 The Opening Ceremony of the Pakistan Navy’s major maritime exercise SEASPARK-22 was held in Karachi. The biennial exercise is steered to assess war preparedness & validate operational plans of the Pakistan Navy against the envisaged threat spectrum, especially in the maritime domain. Chief of the Naval Staff, Admiral Muhammad Amjad Khan Niazi graced the occasion as Chief Guest.

In the opening remarks, the Deputy Chief of Naval Staff (Operations) presented the overview of the exercise. He emphasized that challenges of Grey-Hybrid warfare and contemporary geostrategic environment necessitate an adroit response by Pakistan Navy. He also highlighted factors impinging upon the type and character of warfare in contemporary environment warranting continuous appraisal of environment and reassessment of own plans. He affirmed that Pakistan Navy remains combat-ready and fully cognizant of its responsibility to safeguard national maritime interests during peace and war times. He stressed that exercise SEASPARK-22 will provide impetus to Pakistan’s resolve of maintaining peace and stability by promoting a safe and sustainable maritime environment in the region.

The exercise SEASPARK-22 will be conducted in the Arabian Sea along Pakistan Coast. All naval platforms/ assets of Pakistan Navy, Special Forces & Pak Marines detachments along with other elements of Pakistan Maritime Security Agency (PMSA), Pak Army, and Pakistan Air Force will participate in the exercise.

The Exercise is being attended by representatives of Ministries of Defence, Maritime Affairs, Interior, and National Security Division.