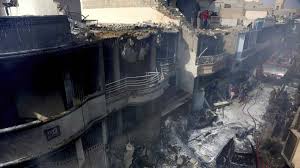 Compensation to the victims of PIA Airbus plane crash will continue from today. All arrangements have been completed.

Compensation is being paid to the victims and their families who have provided all the legal documents in this regard. According to sources, five victims will get Rs 10 million each in the first phase.

It is also learned that two passengers Muhammad Zubair and Zafar Masood, who survived the accident, will be paid Rs 10 million each. The PIA also paid for the treatment of the surviving passenger Muhammad Zubair.

According to sources, the families of the three deceased passengers will also be paid Rs 10 million each. The 22 families affected by the plane crash will also receive compensation of Rs. 28 million. It was also informed that this compensation is being given in case of burning or loss of 14 vehicles and household items

According to PIA officials, the damage to the homes of 22 families will be payed later. PIA has also given six months rent to 22 affected families on the land. PIA has already paid Rs 1 million each to the families of all 97 passengers killed in the plane crash.

According to sources, the PIA has paid Rs 1 million to one woman and Rs 5.5 million to three injured in the plane crash. Compensation to the victims of the plane crash has been started after the settlement between the PIA and the insurance company. On May 22 this year, a PIA Airbus A320 coming from Lahore to Karachi crashed near Karachi Airport.

It may be recalled that 97 passengers and a woman were killed in the plane crash.

PAF is ready to respond to any kind of adventure by the enemy: Air Chief