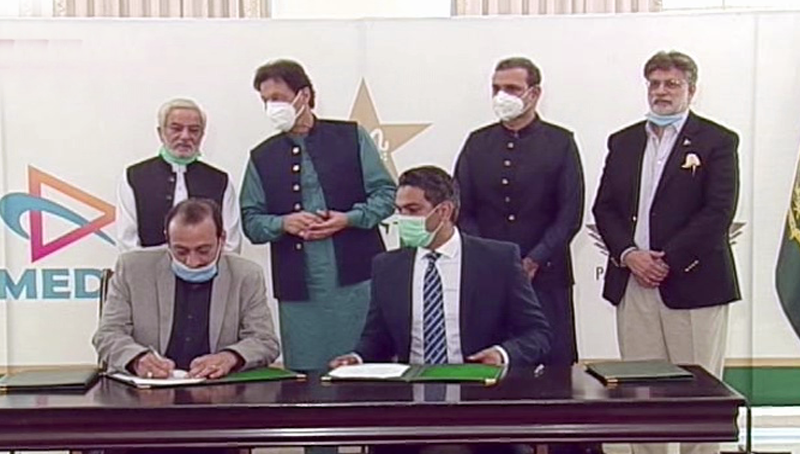 Prime Minister Imran Khan reiterated on Wednesday that the revamped domestic cricket structure will help produce high quality talent in the country that will excel internationally to take Pakistan cricket to high heights. He also approved the latest satellite transmission contract between PTV Sports and the Pakistan Cricket Board (PCB) which was signed for three years on the occasion.

The PM, who is also the PCB ‘s chief patron, spoke here at a press conference and said that the current domestic cricket format, based on regional setup and containing a reduced number of teams (six), would generate world-class players and predicted that in the next World Cup Pakistani would have a much-improved and different team.

However, the trio struggled to convince the PM who reportedly did not give much weight to their claims and clearly told them that the new system is in the best interest of the cricket from country.

In response to criticism over abolishment of the departmental teams, Imran said: “These are teething problems [in the new system]. Whenever new reforms are introduced, such problems arise but the results will be fruitful.”

The PM emphasized that tough competitions always produce the best players and the country will soon be ruling the cricketing world with raised standards and adoption of merit, like Australia, which is the most successful team in the world due to its great domestic structure.

The cricketer turned PM added, “Despite the haphazard domestic system of decades, so many Pakistani players directly qualified from the clubs to become Test cricketers which testament to the abundance of talent here,” said the PM. “How talented they were and how much talent country had,” he said and added that there is no such example anywhere in the world.

“The PCB today signed a satellite broadcast deal for broadcast in Pakistan with PTV Sports and a further agreement to secure cable distribution with I-Media Communication Services,” said the press release issued by the PCB after the ceremony. It said that the broadcast deal will be for the 2020-2023 cycle.

PCB chairman Ehsan Mani, speaking on the occasion, thanked the patron for his unconditional support to the PCB and the efforts of the Minister of Information Shibli Faraz, Special Assistant to the Prime Minister on Information retired Lt General Asim Bajwa and MD PTV to finalise the broadcasting agreement and their efforts to uplift PTV Sports.